Our fearless leader, in the wake of boycotts by xHamster.com and various Broadway shows, has issued an executive order regarding who gets to use what restroom. Of course, after weeks defending the legislation, our man on Blount Street is back-pedaling furiously:

McCrory said in a videotaped messages announcing the order that among other things, it partially drops the provision that people must use bathrooms matching the gender on their birth certificate.

While this remains the policy in schools and government buildings, businesses can decide their “own policy with regard to restrooms, locker rooms and/or shower facilities,” McCrory said.

McCrory said he would seek legislation in a coming short legislative session that would reinstate the right to sue for discrimination in state courts.[…] 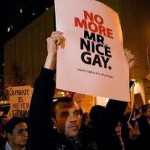 The Charlotte City Council was out of line and out of order.  Moves like their ordinance need to go through Raleigh for a blessing, FIRST.  So sayeth the constitution.  They were told it would not pass muster, and did it to make a political statement.  That political statement has been expanded, enabled, and advanced by a complicit, lazy driveby media and a lack of spine on Blount Street.

Businesses decide?  If locker rooms go gender-neutral, how does a business get by the various lewd conduct-related laws out there? The law — and the cops — tend to frown on men and women exposing their privates in close proximity in public places.

And the suing thing?  That is a sop to the trial lawyers who are lining his campaign coffers — but WILL vote for Roy Cooper.  The lawsuit protection was to keep small businesses and individuals from being sued into the poorhouse by national gay rights non-profits just for refusing to hire a guy dressed like Carmen Miranda or to cater a gay “wedding.”  Instead of making up new, New Age “rights”, HB2 actually strengthened the protections of the First Amendment.

This has been so badly bungled by the NCGOP and its elected, alleged leadership.  Call the special session, push it through, then let the left set the narrative and tone of the discussion.  We saw the gay-stapo in action, threatening all of these businesses and performers about doing business in North Carolina.  Average Americans are too busy working to finance the leviathan eating away at our culture and our economic well-being every second of every day.  Stand up for the existing law of the state?  Stand up for common sense — that boys go to the bathroom over here, and girls go over here?  You’re a bigot.  No Bruce Springsteen for YOU.

18 thoughts on “The sounds of Pat McCrory — once again — folding.”