Once again, leftists are showing their true colors.  We on the right are constantly being painted as the violent hate mongers.  But this election season, thanks to alternative media, 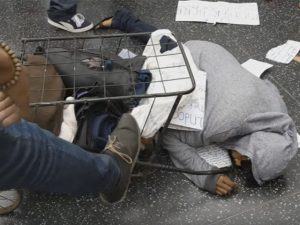 we are seeing more and more that is leftists utilizing violence to silence opponents and express hate.

Exhibit A: The Project Veritas videos revealing how Hillary operatives were paying people to disrupt Trump rallies and incite violence.

Exhibit B: We had a twofer in Lee County: a drive-by media person who also happens to be a county Democrat Party officer.  She posted on social media about bringing ‘a baseball bat’ to the polls.  (I doubt she was acting in the hope that a softball game would break out.)

Exhibit C:  Donald Trump’s star on the Hollywood Walk of Fame was vandalized by a leftist punk.  A homeless woman decided she was going to personally guard it to prevent further vandalism.  For her efforts, she got roughed up by leftist thugs.

Of course, the drive bys are ho-humming the beating of this homeless person.  Imagine if it was a crowd of College Republicans doing the kicking and beating.

Leftists talk about freedom, peace, and love.  But their actions show little more than a lust for control of other people, as well as hatred and violence toward anything or anyone that dares to stand in the way of their ambitions.

THIS is Third World banana republic stuff.  THIS is the kind of stuff Hitler and Lenin rose to power on. THIS is the Saul Alinsky stuff we were warned about in 2008 and 2012.  Barack Obama brought it in the door.  He and Hillary nurtured it and encouraged it.  We need to wipe it out before it gains a permanent foothold in our nation’s governing institutions.

One thought on “The ‘peace and love’ crowd STRIKES again”