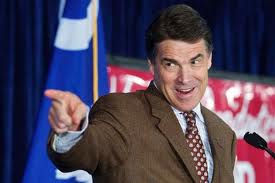 Rush Limbaugh instructs his listeners often to pay attention to whom the alleged mainstream media is mocking and attacking the most viciously.  “That, my friends, is who they fear the most,” The Great One tells us.

Texas governor Rick Perry appears to be the bogeyman of the moment.  Today, reports are out about his record-shattering fundraising.   The Washington Post put out some decades-old claptrap — featuring a lot of anonymous sources — claiming that Perry and his dad enjoyed — WAY too much — hunting at a place where a word — which included letters spelling out a racial epithet — was spray painted on a rock.   Perry’s dad is reported to have spray-painted over the word on the rock, and even turned it over so the spray-paint and word were not visible.

The Raleigh News & Observer — the official newsletter of the NC Democrat Party — dug up a decades old quote in a book about barbecue, where Perry reportedly said something bad about the barbecue produced by a specific Kinston restaurant.  The N&O took this quote — without bothering to check its accuracy — and began running around asking politicians and voters what they thought about Perry badmouthing ALL  North Carolina barbecue.  (Does criticizing the food at one Italian restaurant mean that one hates ALL Italian food?  Is this discussion really relevant to the presidential race?)

In today’s paper, The N&O sycophants feature a poll by a fellow Democrat mouthpiece, Public Policy Polling, on the GOP race for president in North Carolina.  That’s right.  Go talk to a Democrat political consulting firm to find out what GOP voters in North Carolina are thinking:

Fresh from a bounce in the Florida straw poll, the pizza magnate is getting new attention from potential voters, according to an analysis from Tom Jensen at PPP, the Democratic polling firm in Raleigh.

Cain took 27 percent verses Mitt Romney and Newt Gingrich at 17, Perry at 15 and Ron Paul and Michelle Bachmann at 6, the poll showed.

(It’s unclear if Perry’s slide is caused by his impolitic N.C. barbecue remark, or actual policy differences with Republican voters.)

Read PPP’s a full analysis of the changing GOP race for president here.

They are STILL spinning the alleged Perry comment from that book as an attack on ALL North Carolina BBQ.  The N&O has spent two weeks beating on Perry for an unverified quote in a 20 year old book.  And they’re twisting that quote to try to inflict maximum damage on the man in this state.

Contrast that treatment of Perry with what the sycophants at The N&O did with Boss Bev’s comments to The Cary Rotary Club about suspending the 2012 elections.  Within an hour of their first post on the comments, the N&O newsroom was softening their story at the request of Boss Bev’s damage control.  The editor immediately went online to claim her words were NO BIG DEAL — just a joke.  (Even though they were suppressing an audio tape of Boss Bev’s comments, which clearly indicate it was not a joke,  at the time …)

The N&O staff did not admit to even having a tape until at least a week after their tape got leaked to The Daily Caller web site.  If you have a tape supporting your reporting, why not post it to the web site so your readers can judge for themselves?  I’ll tell you why.  The butt-kissers at The N&O knew the tape hurt their girl, and were trying to make it go away.  Tucker Carlson and the folks at The Daily Caller made that a little complicated for them.

Bev’s comments were breaking news.  They were verified by AUDIO TAPE.  Perry is being beat over the head about twenty year old or more unverified allegations and gossip from unnamed sources.

Just remember (The N&O, The Washington Post, The New York Times, fill in the blank … ) lies.   Look at who they attack with the most ferocity.  Nine times out of ten, that is who average-joe Americans need to align themselves with.