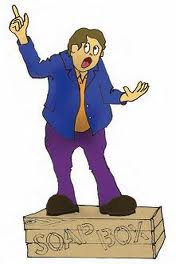 “This current group in village government makes their decisions, then provides a limited opportunity for the public to comment,” Marcum said at a town hall forum Tuesday night, in front of a radio audience and an in-person audience of about sixty people.  “I want to hear from the people FIRST, before decisions that affect their lives are made.”

Marcum’s opponents,  incumbent council members Nancy Fiorillo and Joan Thurman, declined to participate in the forum, claiming it was biased and that it conflicted with their schedules.  So,  Marcum was allowed to face the voters by himself and field unfiltered questions from anyone who wanted to show up and get in front of a microphone.

A number of local political figures were in attendance:  councilman Doug Lapins, commentator and historian Paul Dunn, former county GOP chairman John Owen, Mike McCrann (an attorney leading the fight against development of The Village Green), and a delegation from The Pinehurst Civic Group.

Questions on a variety of hot topics were pitched.    Some questions were softballs.  Some came from people who were clearly skeptics about Marcum’s message.

“I’ve heard a lot of negative tonight,” said one of Marcum’s questioners. “You said a lot of people are moving here.  You said we’ve grown rapidly from 4,000 to over 16,000.  Obviously, people like something about this place. What are they liking?”

Marcum said he believes there is a two-pronged factor that lures people to Pinehurst: (1) the resorts and their golf offerings, and (2) the historic status and general attractiveness of the village.

Owen, the former GOP chair, asked Marcum what he thought about incumbent village council members running for mayor while keeping their seats on the council.  Owen’s question was clearly a shot at Marcum’s opponents: Thurman’s term ends this year, while Fiorillo’s first term has two more years in it.

Marcum said he favors council members resigning from their post before running for something else — especially mayor.  He said the measure would require legislative approval, and he would ask Moore’s legislators to seek the change in Raleigh.

It was noted that, if Fiorillo were to be elected mayor, a replacement for her council seat would be picked after the election.  Marcum noted how undemocratic that process is.

“It is my understanding that the village manager picks someone to fill the vacancy, after the election,” Marcum said.  “The voters have no say in the matter.  This has happened two or three times here recently.”

Marcum also featured a question from one member of the audience about the content of an ad being run by The Village Action Team which calls for council members to be given supervisory authority over government departments.  The questioner said he did not believe that jibed with current North Carolina law.

“I would like to see a more proactive council that is more involved in the day-to-day activities of village government,” Marcum said. “It is my understanding that legislative approval is not necessary, and that direction from the mayor or council can make that happen.”

“If the council can’t control the  village manager,” asked another audience member. “How can you expect them to manage the bureaucracy?”

Marcum continued to make spending by village government a target. He told the radio and in-person audience that the village government has been deficit-spending to the tune of $2 million for the past two years, and was on track to do that again this year.  He said the Pinewild annexation was an act of desperation to use that new revenue to make up some of the budget shortfall.

“Pinewild was never about making those people pay for services they use in the village,” said Doug Middaugh, president of Concerned Citizens of Pinehurst (a sponsor of the forum along with WEEB radio). “They needed Pinewild’s money to fix their mess.  Plain and simple.”

“So, we’ve got about a half million in the village’s budget going toward these three people,” said Marcum.

Marcum said he would like to see a theater  or performing arts center or conservancy find its way to downtown Pinehurst.  He said the old fire station, the theater building, or the post office building would be perfect targets for any of those ideas.

Marcum said he sees the abandoned Traditions development site in Old Town as a problem that can get worse.  He sees it likely going into foreclosure and being resold to someone else who may do something even more undesirable there.  Marcum said the village government violated its own Long Range Comprehensive Plan by approving a project of that density in Old Town.  He said he would like to explore all legal options — including condemnation — to keep the property from becoming a bigger problem to its neighbors.

Marcum said the village has too much of a confrontational attitude in conducting its business.  He said he would like to see more cooperation and partnerships with businesses and government agencies before the village enacts sweeping changes.