The godawful disgrace in Dallas   got me thinking about a discussion I had not long ago with a friend who served in the Army during Vietnam.  He went overseas into the war zone itself AND found himself within a war zone over here.

The Black Panther Party — celebrated among contemporary leftists — and The Weather Underground — presidential buddy Bill Ayers’s group — teamed up to go to war against the US military.  They regularly staged armed assaults against US military bases and convoys stateside. Said my friend:

“I took more fire in California than I did during my entire two tours in ‘Nam. It was unreal.  You’re in a marked US Army convoy heading down a road in California and you come under armed assault.  Bullets are pinging off the hood of your truck and smashing through your windshield. IN California.  IN America.”

An awful lot of the freaks who took to the streets protesting and rioting during that decade are now in power across this country.  Bill Ayers is an honored guest of our nation’s First Family.  Former leaders of The Black Panthers have actually been elected to Congress.

Their modern-day cousins are the ones you see rioting outside Donald Trump rallies throwing eggs, and screaming obscenities at, women, seniors and children.  Their descendants were also found wreaking mayhem and murder in Dallas.   The suspects in the murders of police officers there claimed they were riled 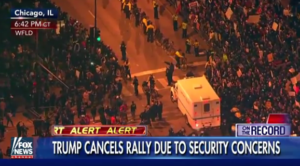 up by driveby media coverage of officer-involved shootings of black suspects across the country.  In our 24-7 news cycles, two shootings in a nation of 350 million can be made to seem like an epidemic.

Shamefully, opportunistic politicians — yes, I’m looking at you Deborah Ross — and other race pimps jump on these officer-involved shootings and prosecute them in front of the cameras, out on the streets, and in front of the mobs.  Instead of in the courtrooms where they SHOULD be dealt with in accordance to due process and the rule of law.

There are some political partisans who see gains from stirring up unrest.  There are also plenty of radical elements out there who will recognize an opportunity to wreak mayhem and violence and do just that.

The 1860s AND the 1960s nearly tore this country apart.  Radical elements look like they’re trying to do it all again.

We’ve got big decisions in the upcoming months.  We need to stay strong and choose wisely.  The fate of our country, our society and our culture hangs in the balance.  Big Time.