Joyce Cotten’s tenure as head of the 2nd congressional district’s GOP may be in its final days — but everybody’s *favorite* mother-in-law is keeping it as vile, nasty and uncivil as she can.

Ma Cotten, as we all know, is the ringleader of the mutiny against the duly elected chairman of the NCGOP.   She’s run Hasan Harnett’s character through the mud airing all kinds of unsubstantiated allegations publicly that range from dishonesty to incompetence to outright criminal activity.

The event — which accomplished little more than electing delegates to the Republican convention in Cleveland — took an excruciating FIVE AND A HALF HOURS.

One text from inside the meeting summed it up nicely: 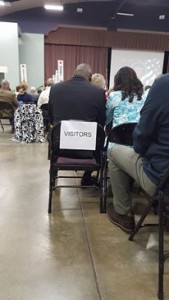 Harnett brought his entire family with him to the gathering in Sanford today.  They were greeted by a pro-Harnett cheering section of Tea Partiers.  But things got rough for the chairman after that.  Ma Cotten’s goons made the volunteer chairman PAY for himself and his family to enter the meeting, and banished them to seats in the back of the room.

After the first 90 minutes of the meeting passed, it became clear that Ma Cotten had no intention of introducing the chairman or allowing him to speak.

Here’s a text from an attendee:

This is disgusting. Our Party Chairman with his family are still not recognized by Dist Chair..we are over an hour into the convention. Chairman Harnett is being forced to sit in the visitor section.[…]After calls from the audience joyce cotten refuses to even say his name.

A few more hours passed, and Cotten continued to plow through the minutiae of the meeting  without even acknowledging the state party chairman’s presence or even considering allowing him the opportunity to address the crowd.  Meanwhile, the chairman and his family sat quietly at the back of the room.

Cotten ignored questions from the audience about why she was not acknowledging Harnett’s presence.  Finally, someone with guts took to the microphone.  Miriam Chu — a candidate for RNC delegate as well as head of Moore Tea Citizens — used her time for campaigning for the delegate position to acknowledge and 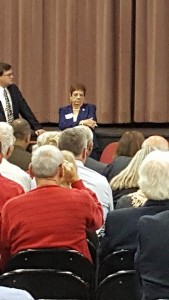 welcome the Harnett family.  (See the video.) Her gracious move resulted in a standing ovation for the Harnetts, and — later — a private verbal rebuke for Chu from Cotten.

As the meeting drew to an end, Cotten made a big show of acknowledging Harnett and inviting him to come up and speak.  The problem?  The chairman — like Elvis — had already left the building. (Hasan endured about three hours more of that nonsense than I could have,)

Another attendee texted us about this move by Cotten:

She had to have seen the man get up and leave with his family.  It was like she had one of her goons watch the parking lot and give her the high sign when he was gone.  So mean.  I bet she kicks puppies.