Joyce Cotten — leader of the ongoing NCGOP mutiny AND chairman, for now, of the 2nd congressional district GOP — is holding court today in Sanford at what will likely be her last time at the podium for a 2nd district convention.

Her role as a ringleader of the coup against party chairman Hasan Harnett has made her a target of heated criticism from grassroots activists. We’ve been alerted that Tea Party groups from across the state intend to be in Sanford for the meeting to demonstrate in support of party chairman Hasan Harnett.  Word IS that Ma Cotten has contacted the Lee County sheriff’s department seeking extra security for the meeting. 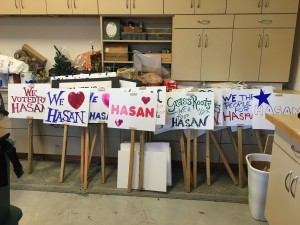 The demonstrators will likely be a mix of suburban housewives and retirees.  They’ve even published a code of conduct for demonstration participants.  We’ve even obtained a photo of some of the signs they plan to use.  THIS doesn’t strike me as Ferguson, Missouri redux.

Leftists break stuff and set stuff on fire.  Tea Partiers march, wave signs, clean up their mess, and go home to their families.