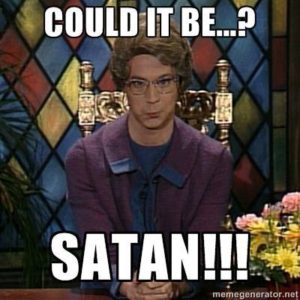 Yep.  The lefty troglodytes TRIED to paint themselves as the national leaders on faith and morality this past week in Philadelphia.  But some of their lot always manage to slip and reveal their true nature:

SALEM, Mass. —It’s a hot summer night, and leaders of the Satanic Temple have gathered in the crimson­-walled living room of a Victorian manse in this city renowned for its witch trials in the 17th century. They’re watching a sepia-toned video, in which children dance around a maypole, a spider crawls across a clown’s face and eerie, ambient chanting gives way to a backward, demonic voice-over. The group chuckles with approval.

They’re here plotting to bring their wisdom to the nation’s public elementary school children. They point out that Christian evangelical groups already have infiltrated the lives of America’s children through after-school religious programming in public schools, and they appear determined to give young students a choice: Jesus or Satan.

“It’s critical that children understand that there are multiple perspectives on all issues, and that they have a choice in how they think,” said Doug Mesner, the Satanic Temple’s co-founder.[…]

Oh, yeah. *Like with, say, global warming, homosexuality and “gender fluidity”, and abortion?*  Try offering an opinion contradictory to the leftist spin on stuff like that in a government classroom and see how far you get. MORE:

On Monday, the group plans to introduce its After School Satan Club to public elementary schools, including one in Prince George’s County, petitioning school officials to allow them to open immediately as the academic year starts. Chapter heads from New York, Boston, Utah and Arizona were in Salem on July 10 talking strategy, with others from Minneapolis, Detroit, San Jose, New Orleans, Pittsburgh and Florida participating online. The promotional video, which feels like a mash-up of a horror movie trailer and a “Saturday Night Live” sketch, will serve to promote the new club along with its website — Afterschoolsatan.com.[…] 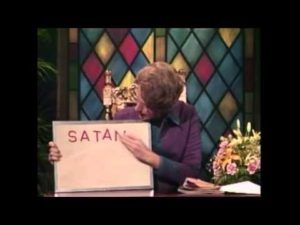 THIS ought to go over BIG in The People’s Republic of Massachusetts.  (And likely Orange County, North Carolina as well.)  And you wonder why Johnny Can’t Read.    MORE:

[…] The Satanic Temple — which has been offering tongue-in-cheek support for the fallen angel in public arenas that have embraced prayer and parochial ceremonies — is bringing its fight over constitutional separation of church and state to the nation’s schools.

But the group’s plan for public schoolchildren isn’t actually about promoting worship of the devil. The Satanic Temple doesn’t espouse a belief in the existence of a supernatural being that other religions identify solemnly as Satan, or Lucifer, or Beelzebub. The Temple rejects all forms of supernaturalism and is committed to the view that scientific rationality provides the best measure of reality.
According to Mesner, who goes by the professional name of Lucien Greaves, “Satan” is just a “metaphorical construct” intended to represent the rejection of all forms of tyranny over the human mind.

The curriculum for the proposed after-school clubs emphasizes the development of reasoning and social skills. The group says meetings will include a healthful snack, literature lesson, creative learning activities, a science lesson, puzzle solving and an art project. Every child will receive a membership card and must have a signed parental­ permission slip to attend.[..]

*Mom, can I go to the Satan thingie tomorrow?* Practicing human sacrifice on Ken and Barbie dolls?  Art project?  *Hey mom, we each painted three sixes on the crowns of our heads.*

And here comes the real kicker:

[…] The Satanic Temple is eager to compete directly with the Good News Clubs and doesn’t hide its belief that its own after-school product is on the right side.

“While the Good News Clubs focus on indoctrination, instilling children with a fear of hell and God’s wrath, After School Satan Clubs will focus on free inquiry and rationalism,” Greaves said. “We prefer to give children an appreciation of the natural wonders surrounding them, not a fear of an everlasting other-worldly horror.”

Yep, that scary Christianity.  * Theres not a thing scary about Satan, The Prince of Darkness.  Nope.  Can’t think of anything.*

Speaking of, um, “Good news”, it appears at least ONE public school teacher is ALL IN on this:

[…] Amy Jensen, a professional educator in Tucson who has a master’s degree in curriculum, instruction and teaching from the University of Denver, says she has decided to lead an After School Satan Club after comparing its curriculum materials with those of the Good News Club. Jensen noted that the Satanic Temple’s materials say the group encourages benevolence and empathy among all people, and advocates practical common sense.
“As a teacher, if I were deciding whether to teach that or the fear and hatred of other people’s beliefs, which is what Good News Clubs teach, I would choose what the Satanic Temple has available,” she said.[…]

And there you go.  Nancy Pelosi said God is all about abortion.  This dingbat says Christianity is all about hate.  (And Satan is all warm and fuzzy.  Puppy dogs and flowers and stuff like that.)

No.  We’re not yelling Allah Akbar and mowing down innocent people with our cars or blowing ourselves up.  But WE — according to these lefties, these Hillary and Barry Obama voters — are the real threat.

12 thoughts on “The After School Satan Club”