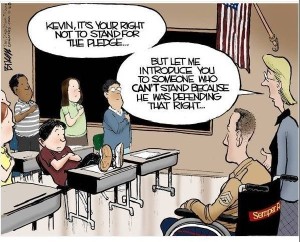 Steve Bouser, editor of our world-class, multiple Nobel Prize and Lambda Award-winning  twice-weekly local newspaper here in Moore County recently had a meltdown, which he documented in the pages of his money-bleeding publication:

In what passes for “rush hour” in beloved little Southern Pines, as I head into work from our home in the Weymouth area, I sometimes notice something odd: Of the cars on Connecticut Avenue, more seem to be heading east than west.

In fact, I did an informal count on a recent morning while walking the dog in Campbell House Park. During a period of a few minutes just before 8 a.m., 34 westbound vehicles went by, compared with 44 eastbound.

What’s that all about? Since it’s morning, shouldn’t most drivers be heading into town instead of out of it? Surely that many people can’t have night jobs here — or day jobs in Raeford or Red Springs.

The answer, of course: Though some of those people may be taking a back-door route to Fayetteville, my guess is that most are heading for Fort Bragg. They are probably Army members or civilians with homes here and jobs there. Sometimes you can make out military berets or camouflage uniforms on the drivers.

I have friends, colleagues and fellow church members who are stationed at Fort Bragg, and I feel only the greatest respect for them. As a veteran, I deeply appreciate all that those serving in our armed forces are doing and have done — especially now, as I happen to be writing this on Memorial Day.

Oh, the old ” I’ve got army friends.  They’re fine people, BUT …”  line.  I’m going to give Steve the same kind of grief that he and his friends give conservatives who say something like “I’ve got plenty of gay friends, BUT …”

Still, the sight of all those vehicles heading east on Connecticut of a morning always gives me pause. We seem to be in a perpetual state of war, don’t we? — so much so that commuting to and from jobs inside a heavily guarded fort has become just as routine for hundreds or thousands of Moore County residents as heading for the mall or the hospital or the community college campus.

Even if somebody goes to work at Bragg — what has that got to do with a “perpetual state of war”?  And “a heavily guarded fort”?  Steve, there are ZERO guards at the gate on Connecticut Avenue.  ZERO.

But the nature of that war differs greatly from our previous major ones, from the Revolutionary War all the way through Vietnam. Those were fought mostly by citizen soldiers, who provided an intensive few years of service, then mostly went home when the war ended to re-integrate into civilian life.

No more. In World War II, 12 percent of the population served in the military, and those on the home front also made great contributions and sacrifices. Now, fewer than 0.5 percent of us bear the burden of fighting our wars.

And they seem to be increasingly separate and different from the rest of us, with sons and daughters often following fathers and mothers into uniform. Some say we’re well on the way to having created a distinct military class.

OK.  Steve — you and your pinko friends whined for years about the draft.  We went with an all-volunteer military staffed with patriotic folks who want to better themselves and protect freedom.  Now, you don’t like that.

Who cares if we develop a military class?  It’s a lot better than pumping out a new wave of low-information, mooching, non-working Obama voters.  By a long shot.

One who thinks so is none other than Karl W. Eikenberry, a retired Army lieutenant general who commanded U.S. forces in Afghanistan from 2005 to 2007.

“Here are the makings of a self-perpetuating military caste,” he wrote in a recent New York Times column, “sharply segregated from the larger society and with its enlisted ranks disproportionately recruited from the disadvantaged. History suggests that such scenarios don’t end well.”

What history? Again, this is an all-volunteer military. Anyone — within reason — who wants to join CAN.   Military service has helped tons of people pull themselves up out of poverty conditions created by politicians Steve and his friends have donated to, campaigned for, and voted for.  This quote comes from a guy who likely got a political appointment to West Point so he could start off on third base and avoid the rigors of basic training with all of those *unwashed types.*

I thought about all of this as I watched excerpts from the speech President Obama delivered last week at the National Defense University, in which he said it was time to move beyond the war on terror — or at least to stop calling it that.. It won’t be easy doing that, and he took some flack for suggesting it, and I’m not sure about his timing. But his point deserves a fair hearing.

OK.  We’ll stop calling this a war on terror if Steve and his friends stop trying to convince us we’re in the middle of an economic recovery.  Let’s ask the folks who survived Benghazi if they believe the war on terror is over.

Predictably, some have attempted to say that the president was losing his nerve or to portray him as soft on fighting terrorists. But his supporters have replied: Tell that to Osama bin Laden — or to the dozens of Islamic bad guys whose lives have been snuffed out by the frighteningly efficient drone strikes that have decimated the leadership of al-Qaida in recent years.

How about the scores of US servicemen and innocent civilians who have been killed by terrorists who have been let out of Gitmo by Big Barry & co.?   Try telling that to the family of the American ambassador who got raped and murdered in Banghazi WELL after Osama bin Laden was killed.

The president wasn’t chickening out. Nor was he declaring some kind of victory. He wasn’t saying that there’s no more threat of future terrorist strikes.

As I understood it, he was saying that a perpetual state of war, with massive troop movements and such, is simply not the best way to continue responding to the situation — that it’s more often a matter of intelligence-gathering and surgical strikes like the one that killed bin Laden.

Never mind that Big Barry fought like tooth-and-nail while he was in the Senate  to squelch the special ops efforts championed by George W. Bush and Don Rumsfeld.  There is AN awful lot of stuff those guys in berets and camos do that NEVER makes it onto those shows you watch on CNN and listen to on NPR, Steve.  Their work is the real reason we have not had anything else like 9-11.  Big Barry is little more than a by-stander, taking credit for the work of people he loathes.

More to the point, Obama also said that living on a permanent “war” footing also poses a clear and present danger of turning us into something that we don’t want to be, something undesired by the Founding Fathers — who envisioned us as more an Athens than a Sparta.

I salute those who continue in their increasingly isolated role of defending the rest of us.

Not according to this steaming pile of crap you produced here.

What a granola Haight-Asbury commie pinko hippie piece of garbage this article was.  No wonder your paper is having to charge for reading its web site and scale back to printing two days a week.