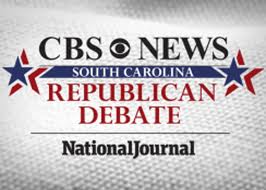 First, CBS News must be ecstatic about the ratings boon this will be.  I bet tonight’s broadcast will get the most viewers EVER for CBS.  (I mean, does ANYONE under 75 normally watch CBS News?)

The alleged mainstream media is pretty much telling us that it is all over, Romney is the man, and Republicans just need to deal with it.  Take the AP’s Chuck Babington:

With eight weeks left before Republicans start voting for a presidential nominee, things could hardly be going better for Mitt Romney.

The former Massachusetts governor entered November with two chief rivals trying to prove he’s not the front-runner. After 11 days of sex harassment allegations against one and a disastrous debate moment by the other, both challengers appear in trouble.

Plenty of things can still go wrong for Romney, and he has yet to prove he can attract more than one-fourth of GOP voters. But his path to the nomination, which would pit him against President Barack Obama next year, has never looked clearer.

Herman Cain, the nonpolitician businessman who galvanized audiences with his “9-9-9” tax plan, stunned political insiders by topping several Republican polls in October. But four women have now accused him of sexually harassing them in the 1990s, charges he adamantly denies but has yet to shake

The Republican establishment, meanwhile, felt all along that Texas Gov. Rick Perry was best positioned to challenge Romney over time, thanks to his money, political experience and stature. Those insiders are busily reassessing after Wednesday night’s Republican debate, dominated by Perry’s cringe-inducing memory lapse while trying to name the third federal agency besides the Commerce and Education departments that he would abolish.

Perry’s repeated and drawn-out stabs at naming the third agency – which turned out to be the Energy Department – triggered an instant torrent of commentators’ derision, pity and dire predictions about the impact on his candidacy.

These lucky events have fallen into Romney’s lap without his having to air any TV commercials, take political chances or veer from his comfortable talking points. He continues to husband his considerable campaign funds while mulling a possible all-out push in Iowa, whose caucus is on Jan. 3. Romney is widely seen as the front-runner in New Hampshire, which holds its primary on Jan. 10.

Some political activists act as though Romney has already secured the nomination. Shortly after Wednesday’s debate, aired by CNBC from Rochester, Mich., Obama’s campaign office issued a few critical reviews, all aimed at Romney. One dinged him for saying he supports the extension of a payroll tax holiday he previously had belittled.

Romney, more so than the seven other debate participants, used almost every question as a chance to criticize not his GOP rivals but Obama’s record on jobs, health care and overall leadership.

Some people had expected Wednesday’s debate to be a turning point, with Cain likely to face fire on the sex harassment issue, and Perry seizing the chance to re-establish himself as the top conservative alternative to Romney. It turned out quite differently.

Cain quickly brushed aside a question about the harassment allegations, repeating his earlier denials and accusing the news media of “character assassination.” None of his rivals jumped in, and the topic was dropped.

That hardly means Cain’s problems are over. Even he has suggested more accusers may emerge. And campaign strategists are watching to see how voters react after having more time to ponder the allegations, which involve two cases of cash settlements to women who said Cain harassed them in work-related situations.

Perry, meanwhile, showed no interest in attacking Romney during the two-hour forum. He passed up an early chance to comment on Romney’s switched positions on several issues important to conservatives.

The economy-dominated debate was moving along with quickly paced exchanges but little drama until the 75-minute mark. That’s when Perry launched what should have been a simple riff on curbing the federal bureaucracy.

He vowed to close three agencies: Commerce, Education and one he couldn’t recall despite long pauses, a stare at his notes and a well-meaning suggestion from Rep. Ron Paul (who wrongly guessed the Environmental Protection Agency).

“Oops,” Perry said wanly, as political commentators rated it one of the most astonishing moments in presidential debate history.

Perry later told reporters: “I’m glad I had my boots on because I really stepped in it tonight.”

Given Perry’s gaffe and Cain’s problems, some GOP insiders think former Speaker Newt Gingrich will be the next rival to pitch himself as the most viable alternative to Romney.

Gingrich gave a typically confident and sometimes lecturing debate performance, berating reporters for questions he deemed inadequate and noting the several books he has written. Many Republicans are drawn to Gingrich’s allusions to history and his tendency to paint the nation’s problems and proposed remedies in sweeping philosophical terms.

But a higher profile for him might also invite re-examinations of his two messy divorces and his political feuds with President Bill Clinton and others in the mid-1990s. Gingrich’s fellow Republicans eventually forced him from the leadership, and he left the House after GOP setbacks in the 1998 elections.

In Wednesday’s debate, Gingrich was asked what advice his company gave Freddie Mac for a $300,000 fee. He said he had advised the mortgage-backing agency as a historian, not a lobbyist. He said he gave officials “advice on precisely what they didn’t do” during the mortgage crisis.

Every tick of that campaign clock, meantime, is sweet to Romney. No one has made a convincing case for why he should not be the nominee. His rivals seem to be losing ground, not gaining.

I remember Chuck from my days on Capitol Hill in the late 80s and early 90s.  He was a DC correspondent for — I think — The N&O, and was a reliable sycophant / dictationist for the Dems.   I would caution ANY and ALL Republicans to take  his recommendations and analysis with a grain of salt.  He likes what is good for the Democrats.

Nominee Romney would be good for BarryO.  It would be like running against a younger, prettier version of John McCain. BarryO has ADMITTED that Romney’s health care reform package in Massachusetts was his inspiration for ObamaCare.  During this campaign season, Romney has spoken approvingly of  much of The Left’s environmental agenda.  In a debate between Romney and BarryO, there would actually be VERY LITTLE debate.  “Yeah, me too,” would be the most commonly spoken phrase of the night.

We can listen to people like Babington, let the media and their liberal masters pick our candidate, and have a repeat of 2008.  Or we can tell Babington & co. to SHOVE IT and tap someone who will actually fight for the people out here in the Real World who work hard and play by the rules.

Sure, Romney has some support among the elite, blue-blood country club Republican crowd in Charlotte,  Columbia, and Raleigh.  But as I talk to a lot of folks on both sides of the border here in The Carolinas, the names that are drawing the most excitement and enthusiasm are Gingrich and Cain.

Both of these guys speak bluntly and tell it like it is.  Carolinians have demonstrated their passion for those characteristics for decades by sending characters like Hollings, Thurmond, Helms, and DeMint to Washington. ( An editorial by former S.C. First Lady Jenny Sanford in The State newspaper summed up the feelings of most Carolinians on the presidential horse race quite nicely.)

As hard as the media has tried to knock out Herman Cain, the American people are not falling for it.  National polling has showed the American people have paid the least amount of attention to the Cain “scandal” than just about any other national news story in history.   It is hilarious to watch the same media, who defended Bill Clinton’s debauchery, fume over the lack of public anger about the poorly-sourced vague allegations against Cain.  With the release of each hit piece on Cain, his fundraising swells, his crowds grow, and the cheering gets louder.

It appears the media is scared Cain might show America that BarryO is not the best Black America has to offer.

People remember Gingrich for his efforts to reform the House and his engineering of the 1994 Republican Revolution.  He is an idea man who demonstrates a lot of passion, intelligence and intellectual curiosity about the issues facing our country.  (His downfall might occur when people start digging out the video of him teaming up with then-First Lady Hillary Clinton on health care reform and then-Speaker Nancy Pelosi on global warming.)

This election is SO much like 1980. The world and the country were a mess. We had a stumbling, bumbling liberal in The White House ripe for the taking.  A former California governor named Reagan campaigned aggressively as a passionate unabashed conservative against the bumbling liberal incumbent.  The media worked hard to tell us how dangerous and extreme Reagan was.  Reagan did not back down or soften up.  He won big, and the county (and the world) are better off for it.