It looks like our senior US senator is once again giving cover to Democrat shenanigans in DC:

Senate Intelligence Committee ChairmanRichard Burr (R-N.C.) said on Thursday that he does not think the identity of the whistleblower at the center of the House impeachment inquiry should be publicly disclosed.

Asked by reporters if he wanted the individual’s identity to be made public, Burr told reporters that he “never” thought that.
“We protect whistleblowers. We protect witnesses in our committee,” Burr added.
His comments come as President Trump and some of his allies on Capitol Hill have called for the whistleblower to come forward and for the individual’s name to be publicly released.  […]

Tricky Dick now finds himself to the LEFT of even Lindsey Graham-nesty:

[…] “[But] I think we should allow the president to know who the accuser is. And I think the whistleblower statute is being terribly abused here,” Sen. Lindsey Graham (R-S.C.), the chairman of the Judiciary Committee, told reporters earlier this week.

[…] Burr’s committee is reviewing the process behind the whistleblower complaint, the handling of which created a high-profile split within the administration.

The complaint — tied to Trump asking Ukraine to open a probe into former Vice President Joe Biden and his son Hunter Biden — is also at the center of the House impeachment inquiry, which is looking into whether or not Trump conditioned aid to the country on it agreeing to open up an investigation.

Burr, however, does want to speak with the whistleblower as part of his committee’s investigation into the process.

Lawyers for the whistleblower have offered to have the individual provide written answers to questions under oath. But Burr told The Hill late last week that the setup was “not acceptable.”

“We have a proven track record of protecting people’s identity,” Burr added at the time. […]

The so-called whistleblower was IDed by name in Robert Mueller’s report on the whole Russia collusion / election interference hoax.  He’s a former Obama White House aide who has been a guest of Joe Biden’s at some swanky DC events.  Here is just a sample of the articles naming him on the Internet: 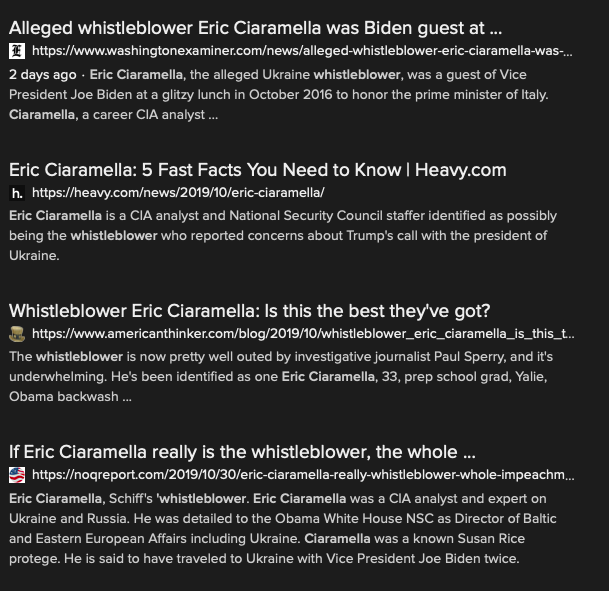 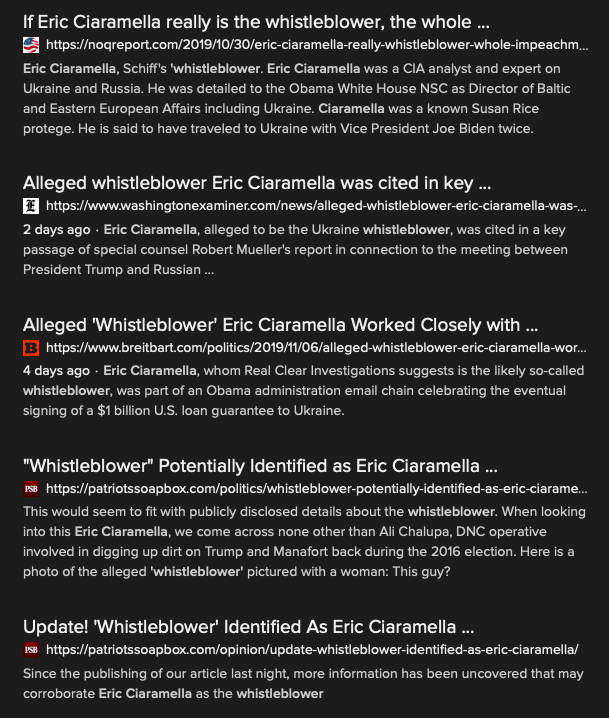 So,  STUPID STUPID STUPID Richard Burr is once again turning his committee over  to Mark Warner (D-VA) and giving bi-partisan cover to the leftist coup attempt in DC.  Burr shares a political consultant — Paul Shumaker — with Thom Tillis. 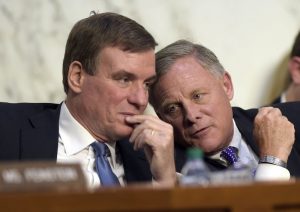 Wouldn’t it be interesting to hear what those two (Shumaker and Tillis)  who are in the midst of telling us (a) how much they love Trump and (b) how bad Garland Tucker is — think about Tricky Dick’s malfeasance?

We have really hit the bottom of the barrel with our Senate representation.  Hell, we’d be better off with TWO empty seats.