Oh, the hits just keep on coming.  Many of us are still trying to cope with the news — delivered by the Court — 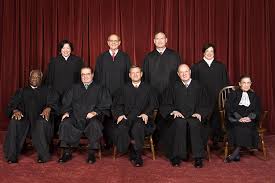 that our Constitution specifically protects gay marriage, ObamaCare, and government witch-hunts against ”unintentional discrimination.”  (And you thought 1973’s Roe v. Wade was some creative jurisprudence!)

Now, we’re being informed that proof of citizenship is not all that important in determining eligibility to vote:

The Supreme Court today refused to accept a case which sought to allow states to supplement a federal voter registration form so as to require proof of citizenship to vote.

Such proof is particularly important given how freely many states are handing out drivers licenses to illegal immigrants, and the Obama administration’s unilateral implementation of quasi-amnesty deferrals (some of which were stopped in court). It’s just not enough anymore that someone is here legally (or at least, is not being deported). […]

Amazing. Our borders are being overrun.  Our federal government is not deporting anyone.  Our public schools and social services offices are swelling with these new, um, “arrivals.”  They have absolutely no “skin in the game.”  Yet, the ruling class in DC wants to make it harder on the rest of us to keep these people from influencing our elections:

[…] Uniformity in elections has implications. One of which is that states will have a more difficult time preserving the integrity of federal elections in their states.

Non-citizens voting is not a trivial problem:

A new study by two Old Dominion University professors, based on survey data from the Cooperative Congressional Election Study, indicated that 6.4 percent of all non-citizens voted illegally in the 2008 presidential election, and 2.2 percent in the 2010 midterms. Given that 80 percent of non-citizens lean Democratic, they cite Al Franken ’s 312-vote win in the 2008 Minnesota U.S. Senate race as one likely tipped by non-citizen voting. As a senator, Franken cast the 60th vote needed to make Obamacare law.

The authors of that study wrote:

This is not just a battle of forms. It’s a battle for preventing theft of elections.