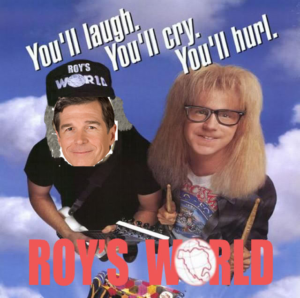 I don’t know about YOU, but I *sure* appreciate it when someone who has (a) never done what I do and /or (b) has no clue exactly what I do tries to tell me (a) he has all the answers and (B) knows how to do what I do better.

Politicians on both sides of the aisle crack me up — not in a good way — when they talk about “creating jobs.”  Of course, they do NONE of that.  They create more problems than they solve.  Business people spend more time figuring out how to work around the messes created by politicians — it seems — than they do actually doing what they do best.

Anyone who knows a damn thing about business and economics knows that jobs are created when a business recognizes a demand for a good or service they provide and decides to recruit help in meeting said need.

In case you hadn’t noticed, we have a governor’s race going on.  Gov. Pat McCrory has gone on and on about all of the jobs HE has created.

Well, Roy Cooper decided to get off his lazy ass and say something today about creating some of those job thingies.  Surely, someone had to explain to him that a JOB is that stuff he has been avoiding for about four years now.    Here’s the

[…] But at a news conference at Central Piedmont Community College, Cooper argued that while the economy has improved across the country, most North Carolinians haven’t seen the benefits.

“The truth is his ‘Carolina Comeback’ has benefited those at the top and done little for working families,” Cooper said. “… Simply because there are more jobs doesn’t mean that they’re better-paying jobs and people are making more money. That has to be our measure of success.”[…]

O-Kay.  How much is “enough”?  And how will state government guarantee higher pay?  Jack the minimum wage up to, oh, THIRTY DOLLARS and hour?  (Good luck growing the economy like that.)

[…] Cooper, the attorney general, said HB2 has cost the state “thousands of jobs and hundreds of million dollars” in investments. McCrory, he said, “doesn’t believe it’s a problem.” HB2 requires people in government facilities to use bathrooms that match the gender on their birth certificates.[…]

How do you lose something that you never truly had in the first place?  Apparently, the steno pool at McClatchy didn’t bother to ask Cooper about his personal lobbying efforts to gin up the boycott and protests over HB2.  MORE:

[…] But Cooper cited figures showing that North Carolina has the southeast’s lowest growth of personal income. And he said growth has been unbalanced. Most new jobs have gone to urban counties, while 55 of the state’s 100 counties have fewer jobs than they did before the recession.

First of all, the personal income statistic is dubious, to say the least.  As late as 2013, North Carolina — in comparison to its neighbors — had the second highest median annual income behind only Virginia.

Also for 2013, North Carolina’s Gross State Product (GSP) — total value added from all the state’s industries — was tops among its neighbors  MORE:

“Better workforce preparedness”?   *Sounds great!* HOW is state government going to do that? And how come Cooper couldn’t achieve that during his three decades in state government under mostly Democrat administrations?

Basically his whole “plan” boils down to spending more money and putting DUDES in the ladies’ rest room.  * Sounds like a winner.*  MORE:

The best thing YOU — Roy — and Pat can do is to get out of the way.  Job growth happens when the shackles are taken off of business owners — the people with means — so they can invest and take risks.  They tend not to do that when we have howling packs of statists screaming threats of lynching against all “rich people.”

Obama’s stimulus didn’t do the trick.  Ol’ Pat’s ConnectNC scam won’t do it.  And neither will Ol’ Roy’s gimmick he’s peddling here.

The greatest period of economic growth in modern history occurred around 1981 when the Reagan tax cut and deregulation juggernaut was at full steam.  People with the means to invest and grow the economy felt confident and jumped out there to take risks.  We’ve got an awful lot of people in charge in Raleigh right now who appear quite fond of pulling government back off of the throats of the investing and entrepreneurial class.  People are starting to feel confident about risk-taking in the Tar Heel State once again.

Want to keep the Comeback coming?  Keep getting government out of the way and growing that confidence.  And you can’t do that by electing Hillary Clinton and Roy Cooper — a couple of flaming bags of poo on our doorsteps — to our state and nation’s highest offices.

7 thoughts on “Roy’s World: Clueless. Not so excellent.”