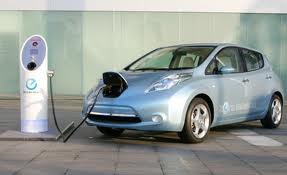 Reserved parking spots get abused ALL the time.  I see plenty of people with handicapped parking passes looking pretty able-bodied as they stroll the short distance from their car to the store’s front door.

The last time I checked, Progress Energy DOES NOT give away electricity.  You have to pay them for it.

A City of Raleigh leader is seeking reserved parking for smartcar drivers like himself so they can recharge their electric cars FOR FREE while they shop:

Raleigh City Councilman Bonner Gaylord is the proud owner of a new Nissan Leaf, an electric car that lets him zip around town gas-free.

There’s just one problem. Gaylord has noticed that people with regular cars tend to park in spots where charging stations have been installed.

Electric cars will run out of power if they can’t plug in.

After Gaylord raised the issue, the city attorney’s office decided to draw up a measure to designate parking spaces with charging stations for use by plug-in vehicles only.

Raleigh is one of three cities taking part in Project Get Ready, an initiative to prepare for the rollout of plug-in electric vehicles. More than 30 charging stations are now available around town.

Gaylord said he wasn’t pushing for fines or penalties. He just wants the public to be aware of the purpose of the charging stations. The city has received more than $30,000 in grants for the program.

“We received significant funding to install these stations, and it’s a shame not to use them,” Gaylord said.

“In the long run, if we diversify our use of energy resources, we’re going to be better suited for whatever the future may bring.”

First, these cars cost an arm-and-a-leg NEW at the dealership.  (So, they are cost-prohibitive to ANYONE who is not a wealthy, yuppie Obama voter.)   Second, they run about 40 miles on ONE charge.

The cars we can ALL afford still run on that expensive gasoline stuff — made that way because of the president and party the smartcar crowd voted for.
It’s absolutely outrageous to expect all of us — struggling to pay our taxes and bills in this Obama economy — to subsidize electricity for these wealthy Prius and smartcar-driving Obama-voting yuppies.   Have Progress Energy slap a meter on these charging stations along with a credit card swipe.