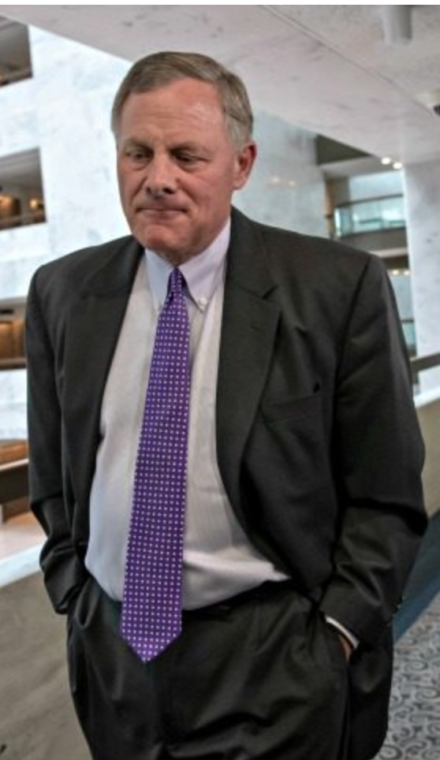 We’ve told you about the FBI seizing his phone,  the insider trading allegations, and all that.   Now, it appears our senior US senator may be entangled in a possible gambling scandal:

News that Sen. Richard Burr (R-NC) may have acted on top secret government briefings about the coronavirus to protect his stock fortunes and may have passed along information to family members sparked the opening of Federal Bureau of Investigation cases against Burr and a handful of other senators. Now, however, new information indicates that investigators should consider expanding their probe of Burr.

Other senators, like Kelly Loeffler (R-GA), were able to show the stock trades were executed by a trustee, and four of the five members had their cases resolved. Only Burr remains under investigation. A search warrant was executed, and Burr was forced to step away from his chairmanship of the Senate’s Intelligence Committee while the investigation continues.

The behavior for which Burr is being investigated is serious in itself. But it may also cast a new light on the senator’s relationship with a South Carolina gambling mogul whose business ventures have been found and accused of engaging in illegal gambling operations, as well as Burr’s involvement with a cabal of other politicians receiving money from the gambling mogul.

The South Carolina-based Catawba tribe has a long-storied role in American history, and in 1993 elected officials moved mountains in order to get the tribe federally recognized. South Carolina, however, has some of the strongest anti-gambling laws in the nation, and the legislation it passed recognizing the Catawba’s ensured the tribe could not get a casino unless the legislature in Columbia approved.

The tribe has partnered with Wallace Cheves, a gaming executive who was once indicted for illegal gambling, fraud, and money laundering. One of his business entities was also successfully suedby the state of Alabama for running illegal casinos, while another has also been accused of running afoul of gaming laws. Together, Cheves and the tribe tried unsuccessfully to change South Carolina laws to allow an on-reservation casino in the state. After failing to do so, the group has spent nearly a decade trying to force the casino onto North Carolina where gaming is more generally accepted.

The response from North Carolina residents and elected officials has been harsh and swift. The state legislature passed numerous measures opposing the move. County officials weighed in. More than 100 House delegates dispatched a letter opposing the transfer. Over 1,000 citizens signed a full-page ad, and religious leaders protested vigorously.

It is precisely this robust opposition that makes Burr’s role in the effort so compellingly suspicious. It is difficult to point to a legislative issue in which Burr has invested more political capital. He co-authored legislation with Sen. Lindsey Graham (R-SC) that would have imposed the casino by congressional fiat and even went so far as to pen an opinion article that featured ad hominem attacks against local opponents of the casino.

These actions put Burr squarely in league with a cabal of politicians seemingly cultivated by Cheves to persuade federal officials to make the casino-across-state lines a reality. Cheves began to write generous checks to politicians, including Sen. Graham, who championed the effort to get the casino in North Carolina. Cheves even chaired the ill-fated 2016 Graham for President campaign. Cheves also began writing huge checks to the Republican National Committee, and Sen. Richard Burr and his related political entities have received at least $16,000 from Cheves.

But Cheves didn’t stop there. North Carolina political sources report that he also went on a hiring streak that has included the chief political consultants for Burr and the current Democrat Attorney General of North Carolina.Perhaps most notably, North Carolina sources also confirm that Cheves is believed to currently employ Tim Moore, the Speaker of the North Carolina General Assembly who has conveniently recused himself from the issue, even while the nature of his power as Speaker inherently blocks possible bipartisan action to oppose Cheves’ casino.[…]

Here’s a  refresher on Speaker Timmy’s role in the casino deal from back in 2015.

[…] Earlier this year, Cheves saw his efforts bear fruit when the Bureau of Indian Affairs moved to take land into trust for the purpose of establishing the out-of-state casino he has been pursuing. The agency’s decision is now mired in federal courts over allegations that the BIA did not follow the laws and was unduly influenced by political considerations.

It is entirely possible that Burr is completely innocent of wrongdoing related to his stock trades. It is also entirely possible that all the politicians receiving payment from Cheves are just true believers in his cause. But the only way to know for sure on either is through conducting a thorough investigation.

At a minimum, the chain of coincidences, well-placed politicians, and outcomes benefitting the man funding it all present a fact pattern that authorities should delve into a little further and figure out who else may be benefitting and how.

4 thoughts on “Problems may be getting BIGGER for Richard Burr”