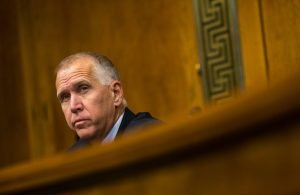 8 thoughts on “Poll: Tillis among the least popular incumbent senators in DC”