In today’s Raleigh News & Observer, congresswoman Ellmers speaks up in support of her boss John Boehner:

Okay.  Let’s turn to some research by our friends at The Heritage Foundation in DC: 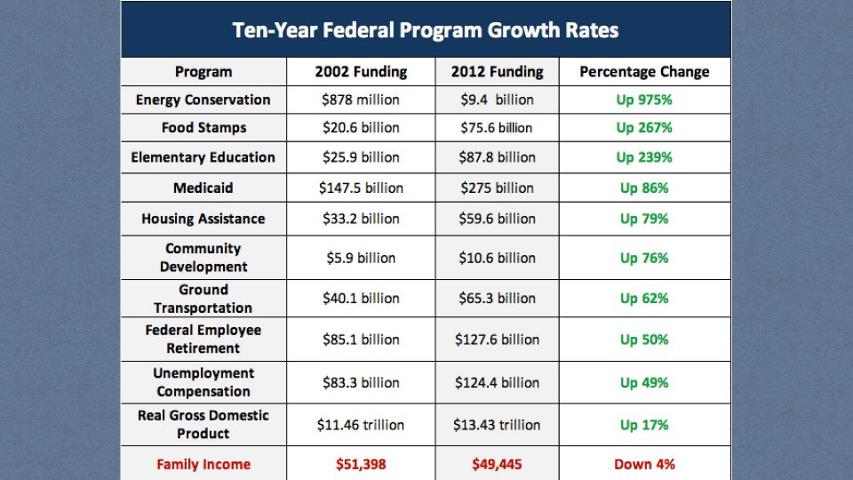 Eight of the 12 years in this chart were years where the GOP ran the U.S. House.   Heritage is a conservative group that promotes small government, free market solutions.  This is not a leftist hit job.
Where are the cuts?  Everything is up — except for family income.   (Government spending is a major component in the calculation of GDP.)
House Republicans — in a move blessed by their messiah Mitt Romney — approved a plan to continue subsidizing portions of the interest on federal student loans.  A clear case of vote-buying right in front of the election.
This will result in $6 billion worth of additional spending.  Some Republicans say they want to pay for it with funds set aside for ObamaCare.  Democrats want it paid for with new taxes.   Barry @ 1600 Penn says he is not going to allow any ObamaCare money to go toward this.
Republicans used to be all about acting like they are in the real world — get money in your hands, and then spend it.  Democrats were always the ones who spent first, without firmly identifying where the money is coming from.
Renee was sent to DC to help stop the spending binge and the overall business.  Faced with a choice of fighting for her constituents’ futures, or partaking in the “honor” of standing by her man from Ohio,  Renee left us standing at the altar — holding the bill.

2 thoughts on “Pants on Fire: What are you cutting, Renee?”