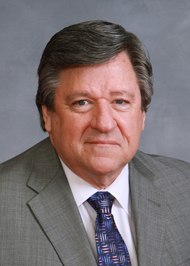 “He spent the last 20 years predicting we were going to lose and when we did declared victory … He was right 1 of 20 times. A broken clock is right twice a day.”