It wasn’t long ago that the nation was exposed to WRAL-TV superstar Laura Leslie’s social media activity. The Jones Street / politics correspondent made it clear what she thought of Christians, Republicans, Donald Trump, Sean Hannity and other conservatives.

Once her postings went public, Miz Laura got real scarce. Now, WRAL has her back on the politics beat — as an alleged objective observer.  (Hell, I wouldn’t want her friends in the gay mafia after me, either.)

Well, she apparently didn’t learn her lesson from the first go-’round.  (Or perhaps her bosses at WRAL don’t give a rip.) Here is some of Miz Laura’s latest on Facebook: 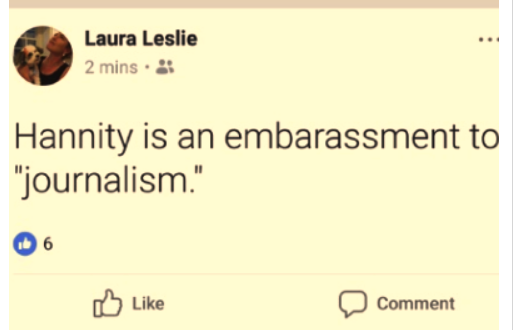 Well, her vicious hit pieces on the Goodmons’ political enemies SURE ought to be embarrassing.