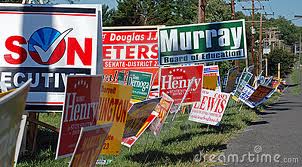 In August, the state legislature enacted  a law which should have a significant impact on political campaigns and local efforts to police sign ordinances:

Towns and municipalities no longer have jurisdiction over some campaign signs placed on their borders.

In August, the N.C. General Assembly enacted into law Senate Bill 315 which permits placement of campaign signs on the rights-of-way of state maintained roads even if those roads are in towns with sign ordinances that would prohibit, or control size or placement of the signs.

The ruling covers most major roads and thoroughfares.

“Streets within neighborhoods are probably town maintained, but all others are mostly state maintained with a few exceptions,” said Matthews Planning Director Kathi Ingrish.

“Before the statute, we were able to use Matthews sign standards on state and town maintained streets within our jurisdiction. Now, as town officials, we have no jurisdiction on state streets or rights-of way where political signs are concerned.”

The state standards for locating political signs are more relaxed than many of the town ordinances and enforcement is being handled by the state.

N.C. Department of Transportation District Engineer Lewis Mitchell says if a sign is found out of compliance, someone from his department will remove it, and then call the owner to come retrieve it from one of the maintenance sheds.

Other than removal, there is no penalty.

Don’t remove it yourself. State law makes it a misdemeanor for a resident to remove a political sign from the public right-of-way.

“If the sign is on a Mint Hill maintained road and it looks like it’s in violation, I will go out and take a look. But if it’s on a state maintained road, they need to call N.C. DOT to report it,” Nichols said.

The Town of Pineville also is feeling the effects of the new law. Officials there also are wondering how it will be enforced.

“Obviously, with this new law, you’re going to have growing pains just trying to figure it out. There are good points of it, but I think it will be difficult to enforce,” said Pineville Planning Director Kevin Icard.

In 2007, there was a bit of controversy in Pinehurst about village employees allegedly removing challenger campaign signs from roadsides but not those of village council incumbents.  Hopefully — with this new law and the passage of time — things will go much smoother this time around.