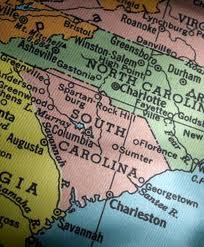 State borders can be tricky and expensive issues. South Carolina spent $10 million and 12 years fighting Georgia over 3,000 acres of mostly uninhabited islands and 10,000 acres of water along the Savannah River.

Trying to dodge a similar fight, South Carolina and North Carolina have been working quietly since 1994 on resurveying their border. To avoid having to get congressional approval of the border, which would cost more, the states had to retrace their original boundary from the 1700s. That sent researchers into South Carolina courthouses, looking for clues as to the original border – clues that led them to a 17-foot scroll stuffed in a drawer and an engraved stone in Greenville County that had not been seen in 150 years.

But as the field work ends, the political work is just beginning.

Last fall, officials sent letters to 93 property owners – a mix of homeowners and business owners, more than half now in North Carolina – notifying them that they could be affected by the new survey. Roughly 30 replied with letters of concern.

“We may have to adjust the line to accommodate some of those people or set up a law where we can grandfather some of those in as far as how they were treated,” said state Sen. Wes Hayes, R-York, and a member of the North Carolina-South Carolina Joint Boundary Commission. “All of a sudden to find out later that they aren’t (in South Carolina or North Carolina) is not really fair to them. That’s probably going to be the toughest part.”

‘I never imagined we could do this’

In his Columbia office, the chairman of the Joint Boundary Commission has a copy of a 1905 survey of a portion of the North Carolina-South Carolina border.

“That was a recent one,” said Sid Miller, the former director of the S.C. Geodetic Survey.

In some surveys, particularly the later ones, surveyors left a trail of stone monuments, some of which have been rediscovered. But the majority of the work in the previous surveys was done by marking trees that since have disappeared.

“They probably weren’t thinking about 240 years from then,” Miller said.

The resulting confusion – is this site in South Carolina or North Carolina? – can be troublesome.

In 1995, for instance, Duke Energy wanted to sell 40,000 acres of Jocassee wilderness to the states of South Carolina and North Carolina. But with no idea about where the boundary was separating the two states, government officials were worried about paying for land that eventually could be found to be in another state.

In researching the issue, Alan-Jon Zupan – who worked with Miller at the Geodetic Survey – found a reference to an 1815 plat of the wilderness. Zupan searched through both state’s archives until finally S.C. archivist Marion Chandler found the plat, not catalogued, in a drawer.

The plat was in sections, 17 feet long. Zupan wasn’t allowed to remove it from the archives, so he spent weeks tracing it by hand on a plastic sheet. Thanks to the plat, officials were able to survey the border in South Carolina’s northwest corner.

The next section of land, from Greenville and Spartanburg counties to Lake Wylie, posed a similar problem. The original survey only mentioned marked trees that no longer existed. Zupan had another idea. After the survey of 1772, South Carolina reissued land grants. If he could find those documents, perhaps they would have more details.

Zupan hired a researcher, who spent several years combing through county courthouses to find the records. Using those records, along with the original survey documents, Zupan and Miller were able to reconstruct the border.

“We literally were walking in the footsteps of the surveyor,” Zupan said. “We generated enough points where we were able to construct the line. There was some areas where there was a long gap. So we picked supplemental points along there to close those.”

Miller and Zupan repeated this pattern, off and on for 18 years, all the way to the Atlantic Ocean. Now, they have re-established 260 miles of boundary, with just a few more miles to go to finish the job.

“I never imagined we could do this,” Miller said. “Two hundred and forty years and nothing is being done, and we’re naïve enough to think we can finish this?”

About a year ago, Judy Helms saw a white truck with an emblem on the side of it pull up to her mailbox. Thinking the occupants were lost, Helms walked down to help.

It was Miller and Zupan, and they were fascinated by her house.

The newly rediscovered border between the Carolinas split it in two.

“The first thing I thought about was, I am not paying back taxes to North Carolina,” Helms said. “But they said, ‘You won’t have to do that.’ ”

Since 1980, Helms had thought she lived in Clover in South Carolina’s York County. But Zupan and Miller found she actually lives in Gaston County, North Carolina.

Suddenly, Helms’ mind was filled with “a thousand address changes, register(ing) to vote again, and my husband and I (digging) a hole across the road for a new mailbox.”

Other changes would be more significant.

A different state means a new phone number. It means different tax rates for both income and property. And it most likely means ripping out utility boxes to sign up with a new power company.

“I don’t think anybody wants to make a fuss,” Helms said. “We just want this to go away, really, and to leave us alone.”

The process yet may do that.

Once the surveying work is completed, and the Joint Boundary Commission approves the border, the boundary will be sent to the states for final approval. South Carolina would have to pass a law, while North Carolina’s governor could handle it administratively.

Hayes, the Republican state senator from York County, said lawmakers have two options: redrawing the state line around affected property owners, or working with North Carolina to pass laws that would grandfather property owners into the states that they think they have been living in.

Hayes likes best the idea of grandfathering; redrawing the lines likely would trigger action from Congress.

“Thank goodness, a lot of the state line is not developed yet,” Hayes said. “It could get a lot harder later on to try to do it than it is now.”  […]