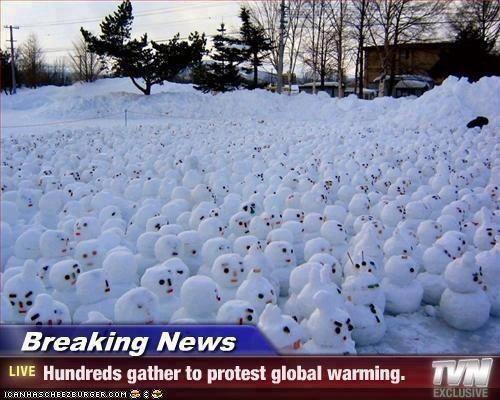 In 2009, the folks at Wikileaks posted a bunch of hacked emails from The Climate Research Unit at The University of East Anglia — at the time, the world leader in global warming research.  The emails strongly suggest that researchers were fabricating and exaggerating their pro-warming findings to keep the funding coming and promote the prevailing leftist narrative:

Sometime last week the Climatic Research Unit (CRU) at the University of East Anglia was hacked and materials stolen off its server. That information, including thousands of emails, has been posted on the internet (including at Wikileaks) and has caused a weekend of frantic blogging. There is more or less a rather juicy scandal brewing.

So far, there is no evidence I have seen that suggests the fabrication of the anthropogenic global warming hypothesis. Certainly, scientists at the CRU are not the only scientists working on climate science. These emails do not provide a silver bullet to kill off that theory.

Much has been made of an email by Professor Phil Jones, head of the CRU, where he says: “I’ve just completed Mike’s Nature trick of adding in the real temps to each series for the last 20 years (i.e. from 1981 onwards) and from 1961 for Keith’s to hide the decline.” The word “trick” doesn’t suggest anything untoward, rather being somewhat clever about some technique. “Hide” could be a problem.

This email is dated November 16, 1999, so it cannot relate to more recent arguments over the extent of global warming.

It is clear, however, that statements suggesting “the science is settled” can no longer be sustained. In an email from Mike Kelly to Phil Jones (dated October 26, 2008), we find this gem, “I’ll maybe cut the last few points off the filtered curve before I give the talk again as that’s trending down as a result of the end effects and the recent cold-ish years.” While on July 5, 2005, Phil Jones wrote: “The scientific community would come down on me in no uncertain terms if I said the world had cooled from 1998. OK it has but it is only seven years of data and it isn’t statistically significant.”

It is possible that plausible explanations can and will be made to explain these sorts of statements. At the same time the emails do provide evidence of attempts to subvert the peer-review process, refusal to make data available to journals, attempts to manipulate the editorial stance of journals, attempts to avoid releasing data following FOI requests, tax evasion, rejoicing at the deaths of opponents, manipulation of results, apparent misappropriation of grant money, and threats to physically assault rivals.

This is not a good look at all. Some of this behaviour is bad form, some of it unethical, and some of it potentially illegal. […]

A new batch of 5,000 emails among scientists central to the assertion that humans are causing a global warming crisis were anonymously released to the public yesterday, igniting a new firestorm of controversy nearly two years to the day after similar emails ignited the Climategate scandal.

Three themes are emerging from the newly released emails: (1) prominent scientists central to the global warming debate are taking measures to conceal rather than disseminate underlying data and discussions; (2) these scientists view global warming as a political “cause” rather than a balanced scientific inquiry and (3) many of these scientists frankly admit to each other that much of the science is weak and dependent on deliberate manipulation of facts and data. […]

OK.  You would think this information would give environmentalists pause. Not quite.  Fast-forward to 2013, where Big Barry’s Pentagon is in hot pursuit of what it thinks is the most serious national security threat of the day:  global warming.  A local tree-hugging group  (somehow, I’m on their mailing list) sent this little jewel along to me: 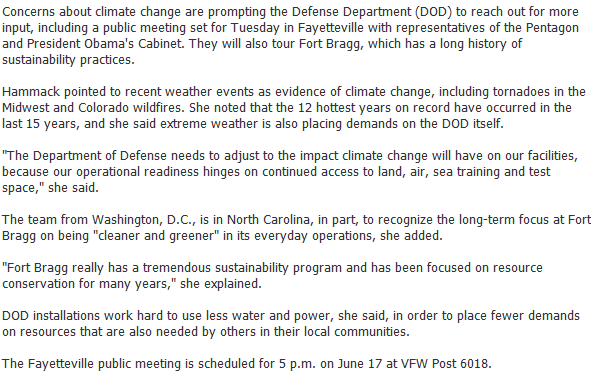 I’d actually argue that a more serious threat to our national security involves politicos with agendas (gays in the military, global warming, women in combat, peackeeping, GIs hugging kids and delivering food) taking our military from its original, intended purpose: protecting our nation, blowing stuff up, capturing territory,  and kicking butt / taking names of our enemies.