Thom Tillis is not so hot a commodity with Tea Party types in the Tar Heel State. One NCGOP establishment blogger is laying the blame NOT on the speaker’s campaign, but on former GOP primary candidate Greg Brannon:

After Thom Tillis won the Republican primary in North Carolina’s race for the United States Senate, a couple of noteworthy things happened. Most heartening was that all of his primary opponents immediately offered him their endorsement and encouraged their supporters to do the same. This culminated in a group appearance at the North Carolina Republican Convention in Cherokee. Each of them offered their genuine and heartfelt word of support for Tillis. They appeared on stage together united in one purpose: to defeat Kay Hagan. I’ve attended some Republican events where some of those competing against Tillis in the primary have offered effusive praise for his candidacy and implored the audience to join them in working for a Republican victory. I applaud them for this. It must be hard to see your hopes dashed, but it speaks volumes about their character and vision for making America better for them to support their former opponent.
Missing from all this: Greg Brannon.

After election day, he has been the sole Republican candidate to take his ball and go home. If he truly thinks that Tillis is the wrong choice, he should consider whether Hagan is a worse choice. Then he should consider whether his actions will lead to Hagan winning. If he were to do this honestly, he would have to admit that his pique and righteous indignation will lead to a US Senate that is more distanced from his highly held principals than if Tillis were to win. In other words, Brannon is essentially working for Hagan.[…]

Really?  And all this time I thought he was working for his Cary OB-GYN practice. 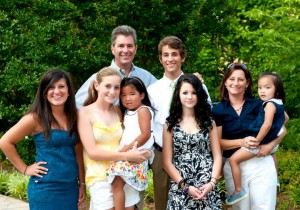 Brannon — as far as I can tell — has been hands-off about this race since the primary ended.  He has his own Brady Bunch at home, and a thriving business to operate. I’m sure political campaigning now takes a distant third place in his life.

I am not aware of Brannon either trashing Tillis or praising Hagan.  During the primary, Brannon was — at one point — running very competitively at the head of the pack with Tillis.  Then Karl Rove’s money started pouring in, a Baptist preacher from Charlotte conveniently jumped in the race, and the Tillis machine ramped up a slander offensive against Brannon.  They did the best they could to paint him as an extremist kook.  Legislators and operatives close to Tillis worked feverishly to leak details of a business dispute involving Brannon to the media.  After the election was over, Tillis operatives contacted Brannon and told him that — if he knew what was good for him — he’d show up for an endorsement photo op with Tillis at the state convention.  Brannon politely declined — noting that obligations to some of his very pregnant patients were precluding him from traveling to Cherokee that weekend.

Brannon supporters will see it differently. In their estimation, Brannon is the only man in North Carolina who is sticking to his principals regardless of the consequences. They admire him for following in the uncompromising tradition of the founding fathers. His unwillingness to see the larger picture or to be strategically pragmatic is a virtue and not a vice. Sadly, it is a quixotic quest that will inevitably relegate him to increasing irrelevance, and along the way will contribute to the election of a woman more diametrically opposed to his ideal of America than her challenger.
Brannon has two choices: either support Tillis as the best choice to implement Brannon’s vision of a return to the constitutional conservatism he champions, or he can sit down and shut up. […]

Sit down and shut up?  You first, pal.

Brannon does have a respectable cult following out there.  But I think, if you look honestly back at the primary, Brannon’s support came mostly from people who encountered him for the first time on the campaign trail and came away impressed with his fight, his passion and his heartfelt principles.  They hadn’t seen a North Carolina Republican candidate like this since Jesse Helms ended his 30-year tenure in DC in 2002.  Brannon was quite an attractive choice when compared with Tillis – whose political radar appears to be guided by whomever puts the last check in his hand.

It wasn’t a cult of personality pushing Greg Brannon.  Brannon, for many people, was a vehicle for striking back at business as usual in our government.   (A good chunk of Brannon’s primary support now appears to be seriously eyeing the write-in campaign of former state legislator John Rhodes.)

Tillis’s problems come from the fact that he and his team have done a lousy job of selling him to the voters.  From his, um, flexible beliefs to his and his supporters’ snide and condescending attitude toward conservatives, Tillis is making a rather uncomfortable bed for himself.

Many seasoned political observers at the national level aren’t sold on Tillis.  Byron York wrote about how our Senate race has two of the blandest, least impressive major-party candidates in the country.  The Senate Conservatives Fund — a PAC founded by former SC senator Jim DeMint credited with aiding the elections of Ted Cruz, Rand Paul, Marco Rubio, and Mike Lee — has taken a pass on the Tillis campaign.  National media has described the GOP effort to unseat Kay Hagan as ‘problematic.’  A number of election forecasting models have been released showing that the GOP can still take a majority in the Senate even if Hagan is reelected.   Hagan’s odds of reelection have been pegged at anywhere from 50-50 to 98 percent.  Many national political media are no longer lumping Hagan in with the ”most vulnerable” Senate Democrats. (She’s also blowing Tillis away in the fundraising department.)

This whole theme pushed by Goffe and other establishment types about shutting up and taking a full dose of Thom Tillis is more comparable to old-school Tammany Hall tactics or Third World banana republics than what our Founding Fathers envisioned.

Times have changed.  It’s about more than the (R).  If the GOP establishment insists on continuing to shove hand-picked, ideologically and morally flexible nominees down our throats, we’re not going to swallow anymore.