GOP US Senate nominee Thom Tillis is in our neck of the woods early next week for a fundraiser at Pinehurst’s National Golf Club.  The visit hits right in the middle of the US Open mayhem.

This Sunday, Kay Hagan is in Tampa, Florida for a fundraiser.  Former Florida congressman Jim Davis and current US senator Bill Nelson (D-FL) are expected to attend.  Three couples named “Ruthven” are listed on 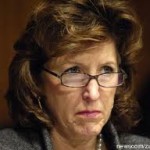 the invitation as hosts.  Given that Hagan’s maiden name is Ruthven — it would be safe for one to assume that those hosts are relatives of our junior senator.

Hagan spent a good chunk of her life as a Florida resident, and still has quite a bit of family there.  In fact, she is related to Florida’s late former governor and US senator Lawton Chiles.

The Senate’s top Democrat and Republican clashed Tuesday in a rare joint appearance before the Judiciary Committee as the panel began a longshot bid to amend the Constitution to get big money out of politics.

Senate Majority Leader Harry Reid testified that “the flood of dark money” unleashed by Supreme Court rulings is “the greatest to our democracy that I’ve witnessed during my tenure in public service.”

His Republican counterpart, Sen. Mitch McConnell (R-Ky.), followed Reid and said efforts to limit campaign spending were a political ploy to rile up Democrats in an election year.

“Everyone on this panel knows this proposal will never pass Congress,” McConnell said.

“This is a political exercise to stir up one party’s political base so they’ll show up in November by complaining loudly about certain Americans exercising their free speech and associational rights.” […]

Remember all of those ads that have been running here in North Carolina with the tag line “paid for by Senate Majority PAC”?  Well, that’s Harry Reid and his Vegas and union buddies. Never mind that, the old coot tells us.  The *real threat*  to democracy are those Koch Brothers who own all of these businesses, contribute greatly to the economy, and put a lot of people to work.  Oh, and never mind that those brothers are not even close to being the country’s top political donors.

This insidious effort by Reid, Schumer, et. al., has additional intimidation provisions and assaults on the First Amendment — such as forcing bloggers to reveal sources and funding.

The economy has gone to hell and back. The world is on fire. And the ruling class wants to devote their time to THIS ???  Why bother amending The Constitution?  They don’t pay much attention to it anyway.

Heck, here in North Carolina, we’ve allowed Karl Rove and Chuck Schumer to pick our last two US senators — and we’re about to let them do it for a third time.

This amendment — even if it does see the light of day — will not save the country.  Neither will all of those TV and radio ads on-the-air between now and election day.

We, as Americans, need to search out the facts for ourselves, and stop acting in response to “guidance” from the mainstream media and those ads during every “Wheel of Fortune” commercial break.

We’re told that elections are all about fundraising.  Knowledge and information are power.  When acquired and used properly, those elements have been able to overcome tidal waves of big money.

4 thoughts on “#NCSEN: On the road with Thom & Kay, Harry Reid & those dadgum Koch Brothers”