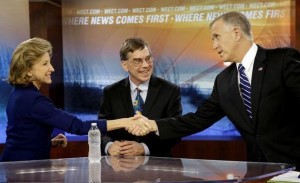 I liked the format of Thursday’s debate much better than the previous two. It allowed for more of a give-and-take between the candidates. It was also interesting to experience Sean Haugh beyond his YouTube videos. We didn’t learn too much more from last night’s discussion, but there were some interesting moments.  Here we go:

LIGHTNING IS GOING TO STRIKE.  I did an honest-to-goodness spit-take when I heard Thom Tillis blast Kay Hagan for ‘crony capitalism.’ Really?  When the Republican has THIS, THIS, THIS, THIS, THIS, and THIS (among others) on his record?

My second major OMG moment came when Tillis claimed to be a fighter against the political establishment throughout his political career.  He cited — as an example — his primary challenge against then-two term Republican legislator John Rhodes. Yep. THE John Rhodes who had been named Americans For Prosperity’s legislator of the year?  THE John Rhodes who regularly taunted Democrat speaker Jim Black with handcuffs? (Black ended up going to jail, by the way.)   THE John Rhodes who was REALLY the only one out there calling attention to monkey business being perpetrated by Jim Black and his RINO sidekick Richard Morgan?  Thom actually was a vehicle for the establishment’s revenge against Rhodes. They wanted Rhodes taken out.  Thom was basically a bullet loaded into their gun.

Tillis also threw in some anecdotes about being elected to leadership roles in the House.  Let me let you in on a little secret — at the risk of sounding too much like Jeff Foxworthy.    If you get elected to something and get handed a gavel and a nice comfy seat on a podium, you might be a BIG TIME member of the establishment.

If you run for office and Karl Rove bankrolls you, and Mitt Romney and Jeb Bush and Chris Christie and Lindsey Graham campaign for you, you ARE the establishment.

My third spit-take moment occurred when Tillis blasted Hagan for running off to DC to become part of “the Republican establishment.”  Yep. I had to rewind the DVR to make sure I heard that correctly.

That gaffe gave Sean Haugh one of the best lines of the night: “It’s OK to get the Republicans and Democrats mixed up.  I do it all the time.”

A PLEASANT SURPRISE. I’ve seen a lot of Libertarian Party candidates in my time.  Usually,  ”kooky” is a kind adjective to use for them. Haugh started off heading down that road, but he settled down as the debate went on.  In fact, I  honestly believe he did a better job of discussing and defending the free market than Tillis did.

During discussion of the minimum wage (why we are discussing this RIGHT NOW, I don’t know), Hagan called for jacking it up and Tillis described it as a decision for state government.  (That position left him wide open for questions from Hagan about why he — as a legislator and speaker of the House —  hasn’t done anything about it.)

Haugh explained that wage levels are best left to the market — determined by what people will actually WORK FOR.  He talked about his “night time job” delivering pizzas and a discussion he had on this topic with a  21 year old co-worker who likely had no more than a high school diploma.  The co-worker recognized that raising the minimum wage would cause prices of everything to go up — ,making it even harder for lower-middle class and poor people to make ends meet.

On at least two occasions, viewers were treated to Tillis admitting that he agreed with Haugh.

A RESURGENT SOCK PUPPET. It really is astounding that this woman is sitting where she is in the polls right now.  She is running as an unrepentant, unapologetic liberal. (Yet, so many Republicans are scared to run as passionate, principled conservatives. Go figure.)  Outside of David Price’s district, Orange County, and the two black congressional districts, these types of candidates usually don’t fare so well.

Yet, when you have a GOP campaign that is allowing the lefties to establish the narrative and POUND it home to the voters without a rebuttal, stuff like this happens.  We were told that Tillis was the money man and could raise plenty of cash to blow Hagan away. Yet, Madame Sock Puppet is the one sitting on the mountain of cash.

The Republican campaign has bet the farm on this whole narrative about missing Senate hearings.  It’s clearly not working when Democrats can counter with videotape of Tillis running around DC fundraisers while the House he is supposed to be leading was in session.

Poll after poll after poll shows that the voters are most concerned about the anemic economy and our porous southern border.  Yet, this campaign is all about local school board issues and committee attendance.

Use the current attack on North Carolina’s marriage amendment to hammer home the point about activist judges  and the importance of having a senator who will not vote to confirm them.  I’d be meeting with the Pattie Curran family — and others like them — to offer sympathy for their troubles and use them as case studies of the damage that Hagan’s beloved ObamaCare has done.  ISIS and committee attendance are two things voters can’t relate to right now.  They’re trying to cope with the skyrocketing cost of living, layoffs, business downturns and failures, and ever-tightening and shrinking finances.  They are concerned about their country being overrun and turned into the diseased,crime-infested, economically-ravaged,  poverty-ridden mess that IS Latin America.

Talk to the voters about this kind of stuff. Explain to them that Kay Hagan and Barry Obama started us down this road, and that by voting GOP in November, we can all do a U-turn and head back in the other direction toward better times.