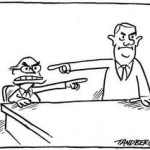 The GOP establishment is trying hard to sell Thom Tillis as a Tea Party-compatible conservative.  But our senior US senator — Sir Richard of Forsythe — is throwing a monkey wrench into things.

On Friday, October 10, a transplanted Yankee federal judge in The People’s Republic of Asheville rewrote the laws of nature — declaring a third gender, and demanding said third gender be allowed to marry just like the other two genders.  See?  The establishment GOP types said. THIS is why you need Thom Tillis in the Senate.  K-HAG has been helping to get these kooky judges approved.

Well, some lefties — specifically Tom Mills and Blinkin’ Chris (on NC Spin this weekend) — have been quick to remind us that Richard Burr (R) was singing that specific judge’s praises and helped Kay escort him through the confirmation process on the way to a 96-0 approval vote in the full Senate.   Tom and Blinkin’ Chris think they are scoring points in defending their beloved Sock Puppet.  But they are actually helping to make a bigger point about RINO-ism.

THIS is exactly what Tea Partiers are talking about.  You try to make a case for your party and distinguish them from the opposition. The

n, elected folks within YOUR party aid and abet the opposition in achieving their mischievous goals.

You could try to hit Hagan on gays in the military.  But, no, Burr voted for that, too.  You could hit Hagan on running up the federal debt and for funding ObamaCare.  But, sadly, Richard did that, too.

Anyone who has seen any success in sales and marketing will tell you that the secret to winning over customers is convincing them that you and your products / services / people are much more beneficial than, and a distinct improvement over, your competitor.  Why would someone abandon what they already have and know if they can’t see a noticeable difference between IT and what you are offering?