Thom Tillis says we need to get over ourselves on this whole ‘small government’ nonsense: 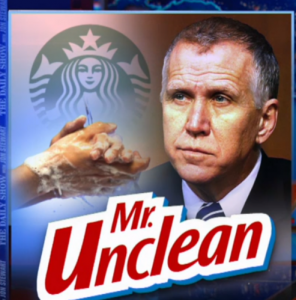 Since the election, I’ve heard some of my fellow Republicans claim that the party received a decisive mandate from voters.

Let’s be clear: the American people didn’t give the GOP a stamp of approval or a mandate to ram through an ideologically-driven, far-right agenda. If the election was a mandate for anything, it was for elected officials in both parties to break through the gridlock to finally start producing results.

Americans from all walks of life have voiced their deep frustration with Washington’s seeming inability to get anything constructive done. For decades, they have watched politicians talk a good game while failing to deliver. They have watched as politicians intentionally create chaos and widen the partisan divide for their own personal gain.

During the election, Donald Trump seized on the nation’s discontent, convincing voters in swing states that he was the candidate who could drain the swamp while Hillary Clinton was the candidate of the status quo.

Republicans should remember that when Trump campaigned, he wasn’t holding up a conservative manifesto at every rally. Instead, his message was simple: cut deals and deliver results.

If Republicans now operate under the incorrect assumption that they have a broad mandate, they are doomed to repeat same mistakes made by Democrats over the last eight years. Democrats misinterpreted the mandate for change in 2008 as an ideological mandate to move the country sharply to the left. They rammed through policies like ObamaCare and Dodd-Frank with little, if any, bipartisan support. Democrats paid the price at the ballot box, and Republicans will meet that same fate if they misinterpret the results from November.

order to deliver solutions that benefit the nation.

Unfortunately, the far-right and far-left are already mobilizing to prevent that from happening, ensuring that we keep the status quo: polarizing rhetoric, stalemate in Congress, and no meaningful results.[…]

Quick lesson:  ANYONE who throw  far- in front of the word right is not, and has never been, a conservative.

The far-left has vowed to stop Trump every step of the way, even though he hasn’t even been sworn in yet. These extreme voices already seem to be influencing the rhetoric of Senate Minority Leader Chuck Schumer, who recently made the proclamation that the only way he would work with Trump is if the President-elect “moves completely in our direction and abandons his Republican colleagues.” If Schumer is sincere about closing the door shut on bipartisanship, then Democratic leaders want to maintain gridlock.

Meanwhile, the far-right is already creating their own definition of what “draining the swamp” means. They’re demanding Republican members to go on record supporting their agenda, which is certainly not the same agenda the American people voted for. This is nothing new. For years, so-called

“conservative” for-profit special interest groups have attempted to turn every provision in every bill into a litmus test of ideological purity. They promise to primary any Republican who dares to even think about working in a bipartisan manner.[…]

“Litmus test of ideological purity”?  Oh, you mean stuff like doing what you said you were going to do when you were down here campaigning to the voters?  *Imagine, the nerve of demanding Republican politicians stand by the party platform. *   (I bet that party loyalty stuff sure gets in the way of paying back the donor$$$$$$$$$$$$$$$$$$$$$$$.)

Both the far-right and the far-left want to maintain the gridlock and dysfunction. Together, they represent the single greatest threat to producing progress for the American people.

Our founding fathers thought “gridlock” and “dysfunction” was great.  They purposely wove into the very fabric of our Constitution.  A lot of harm gets do

ne with people “crossing the aisle” to “get things done.”

I, for one, have no intention of sitting down and watching another re-run of the same divisive partisanship we see year after year. I resolve to work with my colleagues to succeed in producing the good rather than failing to produce the perfect.

I’ll be reaching across the aisle to find opportunities to work with Democrats on the issues that desperately need to be addressed: reforming the nation’s broken immigration system, providing regulatory relief, overhauling the VA, reforming our criminal justice system, and modernizing our nation’s crumbling infrastructure.

Republicans are in power and have the potential to deliver historic results – but only if we work together with the Democrats who also want to see progress. We owe it to the American people to set aside the areas where our ideology may prevent progress, and find common ground where there are plenty of opportunities to pro

duce good results. It is time for Republicans to step up and lead.

Did anybody vote for THIS?  If we wanted someone to work with the Democrats, we would have sent ol’ Kay back for six more. You’re in the majority party.  Why not work on hammering through the agenda that got you that majority?

32 thoughts on “#ncpol: Thom tho$$es conservatives under the bus. (OUCH!)”