Our *conservative warrior* Thom Thilli$$$$$ is crossing the aisle again — much to the dismay of law-and-order loving Americans:

Today, Senator Thom Tillis (R-NC) announced that he has co-sponsored the Sentencing Reform and Corrections Act, and worked with the bill’s original co-sponsors to include language in the manager’s amendment that requires the Department of Justice to review each candidate for early release on a case-by-case basis. Tillis’ language is included in the bill that will be voted on by the Senate Judiciary Committee later today.

Under the legislation, sentencing courts must consider a multitude of factors when considering the reduction of the mandatory minimum sentence of a defendant. The language proposed by Senator Tillis adds an additional layer of accountability by also requiring the Department of Justice to conduct a particularized inquiry of the facts and circumstances of each defendant.

“During my tenure as Speaker of the House in North Carolina, I worked across party lines to help enact the most significant sentencing and corrections reform effort undertaken in decades.  Today, North Carolina is seeing the results of that effort, as we are responsibly lessening our investment in corrections and reinvesting those savings in community programs that reduce crime and build safer communities,” said Senator Tillis. “Although it is not perfect, I’ve co-sponsored the bipartisan Sentencing Reform and Corrections Act with the hope that we can accomplish similar outcomes at the federal level. After consulting with members of the law enforcement community, the Department of Justice, and my colleagues on both sides of the aisle, I worked with my fellow committee members to include a commonsense provision that aims to provide additional accountability and safeguards at the federal level.”

Alabama’s Jeff Sessions, a former Reagan-appointed US attorney, a Reagan nominee for a federal judgeship blocked from confirmation  by Democrats and one of the sharpest conservative minds in the US Senate, sees things pretty differently:

Sen. Jeff Sessions warns that Congress must be careful to ensure the sentencing reductions bills pending before Congress did not boost already rising crime rates and “sign death warrants” for innocent victims.

“Frankly, this is Obama’s policy. And the attorney general who he’s appointed, Loretta Lynch’s policy, and Eric Holder before her, to basically cut people’s sentences that have been lawfully imposed throughout this country,” Sessions said. “And it’s impacting public safety, in my opinion, and will continue to do so in the future.”

Sooooooo — our junior senator is carrying water for the same attorney general who is threatening us and suing us to make us open all of our ladies restrooms and locker rooms to MEN?  *NICE.*  Is THAT we voted for?  (Hell, I bet Kay Hagan would be co-sponsoring this TOO.)  MORE: 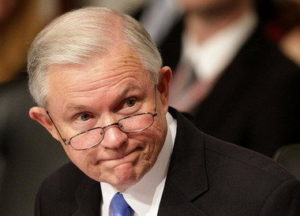 “In the last year, we’ve lost 123 police officers, 35 in the first four months of 2016. Violent crimes and murders have increased across the country at alarming rates. Let me just share with my colleagues some of the things we’re seeing in violent crime. Recently, the Major Cities Chiefs of Police Association, a long-established group, called an emergency meeting to deal with the numbers I’m going to share with you today,” he said.

According to FBI statistics released just this year, the number of violent crimes committed across the country was up in the first half of 2015 compared with the same period of 2014. The number of murders, rapes, assaults, and robberies were up all over the first six months of 2015. There was a 6.2 percent increase in murders. Violent crime across America rose 5.3 percent in large cities and overall, violent crime increase 1.7 percent — an increase that followed two consecutive years of decline.

My judgment is this is a long-term trend. I think we’re going to continue to see this increase. I wish it weren’t so, but I’m afraid it is,” Sessions said, adding that the Major Cities Chiefs Association gathered data to show that the number of homicides increased in over two dozen major U.S. cities in the first quarter of the year.

Sessions also quoted FBI Director James B. Comey’s concerns about the rising tide of crime: “‘I was very worried about it last fall, and I am in many ways more worried, because the numbers are not only going up, they’re continuing to go up in most of those cities faster than they were going up last year. Something is happening. I don’t know what the answer is, but holy cow, do we have a problem.’”

Comey also stated publicly he remembered the “crime wave of the 70’s and 60’s, and how enforcement brought it down dramatically,” Sessions added. “He said we don’t want to forget the lesson we learned previously.”

“Director Comey has also suggested a possible explanation for this spike in violent crime included gang and drug violence. He has also suggested that greater scrutiny of police as they do their duty had possibly changed the way officers and communities interact, something he calls the ‘viral video effect,’ which he believes leads to less aggressive policing,” he said.

“When you have 20, 30, 40 percent increases in crime, you’re talking about doubling the crime rate, the murder rate in America in two or three years,” Sessions warned. “After we spent 20 years bringing it down by half. We’ve got to be sure what we’re doing here, colleagues, is smart, and we’re not signing death warrants for thousands of American innocent citizens.”

And Theam Thilli$ can’t understand why their guy gets these F-ratings from Conservative Review, Heritage Action, Club For Growth and the like.