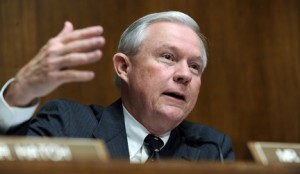 US senator Jeff Sessions (R-Alabama), one of the few gutsy, real men left in Capitol Hill’s Republican ranks, has laid out a powerful prosecution of the federal government’s negligence in protecting our borders and enforcing immigration laws.  Sessions, chairman of the subcommittee on immigration and the national interest, has published a Chart Book laying out the facts of current immigration policy in easy-to-understand detail:

[…]  The overwhelming majority of immigration to the United States is the result of our visa policies. Each year, millions of visas are issued to temporary workers, foreign students, refugees, asylees, and permanent immigrants for admission into the United States. The lion’s share of these visas are for lesser-skilled and lower-paid workers and their dependents who, because they are here on workauthorized visas, are added directly to the same labor pool occupied by current unemployed jobseekers. Expressly because they are admitted into the U.S. on legal immigrant visas, most will be able to draw a wide range of taxpayer-funded benefits, and corporations will be allowed to directly substitute these workers for Americans.

Improved border security would have no effect on the continued arrival of these new foreign workers, refugees, and permanent immigrants—because they are all invited here by the federal government. The most significant of all immigration documents issued by the U.S. is, by far, the “green card.” When a foreign citizen is issued a green card it guarantees them the following benefits inside the United States: lifetime work authorization, access to federal welfare, access to Social Security and Medicare, the ability to obtain citizenship and voting privileges, and the immigration of their family members and elderly relatives.

Under current federal policy, the U.S. issues green cards to approximately 1 million new Lawful Permanent Residents (LPRs) every single year. For instance, Department of Homeland Security statistics show that the U.S. issued 5.25 million green cards in the last five years, for an average of 1.05 million new legal permanent immigrant annually. These ongoing visa issuances are the result of federal law, and their number can be adjusted at any time with a new federal law.

However, unlike other autopilot policies—such as tax rates or spending programs—there is virtually no national discussion or media coverage over how many visas we issue, to whom we issue them and on what basis, or how the issuance of these visas to individuals living in foreign countries impacts the interests of people already living in this country.[…]

Here are some of the highlights of his report:

And here’s a wee bit more food for thought:

[…] The predominant supply of low-wage immigration into the United States occurs legally, and the total amount of immigration to the

United States has risen dramatically over the last four decades. Under current federal policy, the U.S. issues “green cards” to about one million new Legal Permanent Residents (LPRs) every single year. For instance, according to the Department of Homeland Security, the U.S. issued 5.25 million green cards in the last five years, for an average of 1.05 million new permanent immigrants annually. New lifetime immigrants admitted with green cards gain guaranteed legal access to federal benefits, as well as guaranteed work authorization. LPRs can also petition to bring their relatives to the United States, and both the petitioner and the relatives can become naturalized citizens.

[…] In the post-World War II boom decades of the 1950s and 1960s, annual legal admissions were roughly two-thirds lower, averaging together less than 3 million grants of permanent residency per decade—or about 285,000 annually. Moreover, due to a variety of factors, including lower stay rates and stay incentives, the total foreign-born population in the United States actually declined from about 10.3 million in 1950 to 9.7 million in 1960 and 9.6 million in 1970. During this economic period, compensation for American workers nearly doubled.

These lower midcentury immigration levels were the product of a federal policy change—after the last period of large-scale immigration that had begun in roughly 1880, President Coolidge argued that a slowing of immigration would benefit both U.S.-born and immigrant-workers: “We want to keep wages and living conditions good for everyone who is now here or who may come here. As a nation, our first duty must be to those who are already our inhabitants, whether native or immigrants. To them we owe an especial and a weighty obligation.”

Additionally, the U.S. legally issues each year a substantial number of temporary visas which provided opportunities for visa overstays, a major source of illegal immigration. The Census Bureau therefore projects that absent a change in federal policy, net immigration (the difference between the number coming and the number going) will total 14 million by 2025.Not only is the population of foreign-born at a record level, but Census projects that, in just eight years, the percentage of the country that is foreignborn will reach the highest level ever recorded in U.S. history, with more than 1 in 7 residents being foreign-born and, unlike the prior wave, surge towards 1 in 6 and continually upward, setting new records each and every year. […]

Pretty much the entire North Carolina delegation to Congress has been bad on the immigration issue.  Walter Jones and Mark Meadows are the two exceptions — having been the most consistent on border security and opposing amnesty.  Renee Ellmers and Robert Pittenger have been praised by pro-amnesty groups for their dedication to the cause.  Everybody who has voted FOR  these CRomnibus spending bills has voted FOR the funding of amnesty and sanctuary cities.  In the Senate, Thom Tillis voted to keep funding amnesty and sanctuary cities.  (At least he’s a man of his word.  He told us what he was going to do in the Senate race.)  Burr voted for cloture on the CRomnibus, but voted against the bill — a move that makes him just as complicit in the matter as Tillis.

Out of control immigration is breaking our country with the strain it’s putting on the social welfare net.  It’s killing job opportunities for Americans, and driving down wages for everyone.  Don’t let these politicians fool you.  Immigration is a huge problem — a huge issue — facing our country.

19 thoughts on “#ncpol: The cold hard reality on the immigration issue”