Yes, Hasan Harnett has returned fire in the very public political spat that has the chattering classes chattering and his continued chairmanship of the NCGOP on the line.  He sent out THIS email today:

[…] I hate that this internal conflict has boiled over and gone public. I have tried for many weeks to get this resolved privately. My name and reputation have been attacked. I am a volunteer Chairman. I sacrifice my time, honor, and fortune for this party. I want nothing more than it to grow and be a successful organization.

I have been met with opposition from the day I was elected. People have been scheming and working against me, but I am not going to sit down and shut up. The establishment wants to limit involvement in our party and shut out the grassroots so it is easier to control. 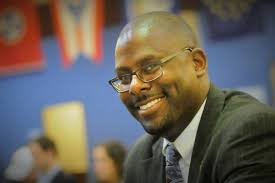 Executive Committee so that they can hear the truth for themselves. It was a recommendation. They do not have the authority to set the fees and have never in our party history set the fees.

After I called the convention, Dallas Woodhouse the Executive Director without any authority to do so kicked me out of the databases, website, and my own email. That is when things went public. I tried for many days to resolve these disputes internally, but Woodhouse refused.

Now, HERE is where it gets interesting:

After being shut out of the databases, website, and my own email,Vice Chairwoman Michele Nix and I were contacted by Ken Robol the website coordinator for the 3rd district NC GOP telling us that he can “hack” into the website. As shown in the attached PowerPoint, I did not solicit the hacking of the NC GOP website, and I never ordered anyone to hack into the website.

After text message conversations (see screenshots) with Ken Robol, Robol immediately went to Tom Stark NC GOP General Counsel to make a statement saying I ordered him to hack the NC GOP website. Ironically, the organizer of the Central Committee meeting to censure me was Kim Cotten West, the 3rd district Chairwoman, the same district where Ken Robol resides.

Interesting. He is contacted by an associate of Kim Cotten-West (daughter of Joyce Cotten) about “hacking” the web site, and the next thing he knows he’s being dragged up in front of the central committee by Ms. Cotten-West for censure.   (Here is a Powerpoint with screen shots confirming Harnett’s version of events.) MORE:

I repeat, I never solicited nor ordered the website to be hacked.

All of the emails, screenshots of conversations, and details are listed in the attached PowerPoint.

I hope that we can move past this. I pray for Dallas Woodhouse and the Central Committee. Even with the extreme untrue allegations against me, I still believe we are all on the same team. The truth must be released, and the public can decide for themselves.

18 thoughts on “#ncpol: The chairman strikes back (with pictures!)”