We’re having a special legislative session today to clarify — among other things — that men need to stay out of the ladies’ room. It’s amazing, I know.  But considering the fact that a JUDGE has found the concept of only men and women getting married to each other problematic ,  that task will become one of many things we will deal with that we thought were settled common sense.

On top of that, those *special* folks on The Wake County School board are planning to tie in state law about recitation of the Pledge of Allegiance to lessons about government coercion.   Really?  Seriously?

I hope said lessons will help students take note of which political philosophy thrives on government coercion.  The same crowd bitching about students saying the Pledge are fine and dandy with government bureaucrats bankrupting caterers and florists with fines for refusing to partake in gay wedding festivities. Does TAKING money out of your check each month and demanding a return form from you by April 15th count as “government coercion”?  TRY opting out of THAT.

That same crowd that has a problem with kids saying The Pledge is fine and good with siccing bureaucrats on small businesses that object to trannies in their establishments’ ladies’ rooms. 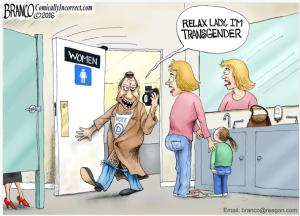 The defenders of the Charlotte bathroom ordinance defend it by suggesting it is only for “public” places.  Under the Americans with Disabilities Act, any establishment that allows people to walk in from the street and conduct business is considered “public.”  They are  not just talking about government owned stuff.  Churches can be considered “public.”   Think about it.

THIS GUY in Seattle certainly turned the tables on this issue with the Prius-NPR-reusable shopping bag crowd.   They try to paint outrage over stuff like this Charlotte ordinance as hypocritical for conservatives — you know, government stepping on locals.

Kinda like the federal judge stomping out our state constitution’s marriage amendment, huh? Government bullying people into complying with a certain political agenda is WRONG at any level.  Making people accept men in the ladies room is one thing. So is making a private business cater a gay wedding.  Demanding that (1) you become a citizen of the US if you want to live here and receive benefits, and (2) pledge allegiance to the country you are a citizen of is something entirely different.

This is not about “civil rights” or protecting someone’s feelings.  THIS is just one more phase in the long-term project of stomping out every last vestige of moral fiber and traditional values left in the society.  It’s about achieving Karl Marx and Friedrich Engels’s dream of a society where everyone owns everything, everyone is treated the same, and there are no class divisions.  The former Soviet Union, the current thug-ocracy in Cuba, and George Orwell’s ‘Animal Farm’ all proved that “drea 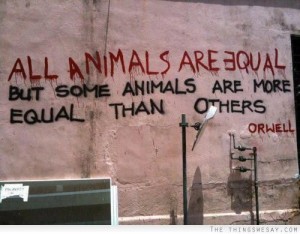 m” to be pure poppycock.

This is more than just bathrooms.  If you give these people an inch, they take a mile.  Social security started out as a short-term fix to help old folks make it through the Depression.  The “Great Society” is in its 50th year and poverty and dependence is getting worse.  The noble desire to bring an end to ‘Jim Crow’ gave us racial quotas for K-12 school assignments (busing), college admissions and employment.

Regardless of what happens in Raleigh this week, the leftist hordes will find a cooperative judge to get creative on their behalf.  Our society will continue to be altered by people we never got to vote for or against.

Somewhere, at some point, you have to put your foot down and say HELL NO.

11 thoughts on “#ncpol: Leftists, The Pledge, Dudes in the ladies’ room, and COERCION.”