It’s the Ides of March in late September.

Remember how upset some folks at NCGOP HQ got when some party activists criticized GOP candidates during the general election?  We had tribunals and expulsions from the party. Oh, it was quite ugly.

Meanwhile, there’s something quite similar happening down in Charlotte that doesn’t appear to be raising NCGOPe dander:

Yep.  Richard Vinroot — one of those guys we conservatives were asked to hold our noses for and support — is backing the Democrat challenger to an incumbent GOP state House member.  And WHERE is the Hillsborough Street lynch mob?

If you think THAT’S bad, check out what Big Rich is doing in the 9th congressional district race: 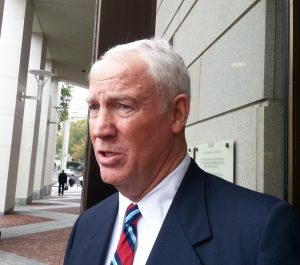 […] “If you’d called me today and the reverse had happened, I would have said I’m going to support Dan McCready because I respect him and have difficulty with Robert,” said former Charlotte Mayor Richard Vinroot, a Republican who is now undecided in this race. “But that’s not the way I feel about Mark. I have great respect for Mark.”[…]

Hmmm.  A Republican “leader” —  a former party standard-bearer — is “undecided” on whether he will back the GOP nominee against the Democrat in November.