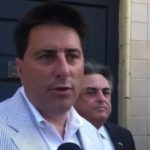 With President Truman, the “buck” stopped “here.”  At NCGOP headquarters, it apparently stops with the interns.

One again, North Carolina Republicans are having to endure embarrassing publicity brought on by that hot-mess-with-the-name-from-Texas.™  Dallas Woodhouse was front-and-center in the smear campaign against his former boss Hasan Harnett.  He TRIED to smear WBTV’s investigative bulldog Nick Ochsner.    He got caught sending out info under Harnett’s name, without Harnett’s permission.  (We actually got an apology from him on that one.)  Oh, and let’s not forget Carolina Rising.

Now, Grandpa Robin has apparently nodded off again and the

kids have made some mischief that has caught the driveby media’s eyes.  You may have heard about the notorious tweet from NCGOP HQ bashing Tim Kaine for allegedly wearing a Honduras flag pin instead of an American flag pin.  It turns out that he was wearing a pin honoring his active duty Marine son — which doesn’t look a thing like the Honduras flag, by the way.

With all of the action in North Carolina, Dallas and the kids HAD to go stick their nose into Donald Trump’s affairs — which the NY billionaire appeared to have been handling just fine.

Apparently, Grandpa Robin woke up and got word to uncle Art and uncle Pat about what the kids at NCGOP HQ had done.  So, Dallas apparently got called on the carpet and made to offer up the following on his Facebook page: 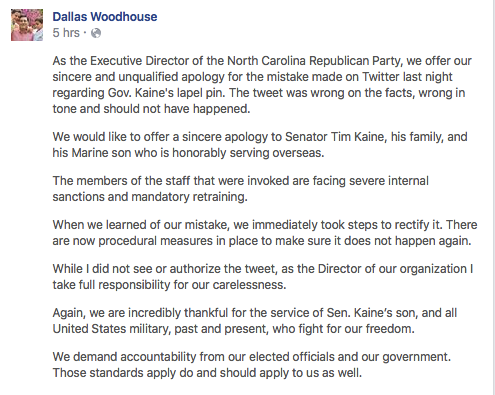 Out in the real world, a person who screwed up with the frequency and magnitude Dallas has would have been terminated aeons ago.  Any Republican victories in North Carolina in November will be IN SPITE OF this guy’s continued employment and existence.