It appears that we’re starting to see some signs of fight in the NCGOPe.  They’ve gone from rolling over and showing their bellies in the whole NC-09 affair, to showing their teeth and defending Mark Harris.

Now, it appears the folks closer to the right side of the political spectrum  are demonstrating that THEY TOO can play political hardball:

Today the NC Values Coalition filed with the Clerk of the North Carolina House of Representatives a memorandum and supporting evidence of absentee ballot irregularities that occurred in the 2018 general election in House District 103 (HD103).  Along with this memorandum and supporting evidence, the NC Values Coalition sent a letter to the Speaker of the House, requesting that he refuse to seat Rachel Hunt as the duly elected Representative of HD103, while the House conducts a full investigation into voting irregularities that occurred in HD103 using absentee by mail ballots.

The Executive Director of NC Values Coalition, Tami Fitzgerald, stated: “The State Board of Elections committed malfeasance when it instructed county boards of elections to ignore the law clearly requiring absentee by mail voters to mark and affirm their ballots in the presence of two witnesses or a notary. At least 300 voters improperly marked and affirmed their ballots in HD-103 and NC-9 and many other ballots were improperly or illegally cast.  Many voters and witnesses involved in these irregularities have signed sworn affidavits. Proper application of the law could result in Bill Brawley’s re-election to HD103 and almost certainly would have increased Mark Harris’ lead in NC9.

Given these improprieties, the negligence of the now-defunct board of elections, and the clear conflicts of its past two chairmen, it is clear that the board mishandled these two elections and who knows how many others.  The State House of Representatives should follow the lead of the United States House of Representative and decline to seat Rachel Hunt until it has thoroughly investigated this matter and determined which candidate won the most legal votes. The results of every close election in the State should be in question.” […]

Apparently, what’s good for the right reverend Harris is also good for the daughter of Democrat capo di tutti James B. Hunt.

If you have any doubt about what Jones Street Republicans think about this idea, check out this tweet from House majority leader John Bell: 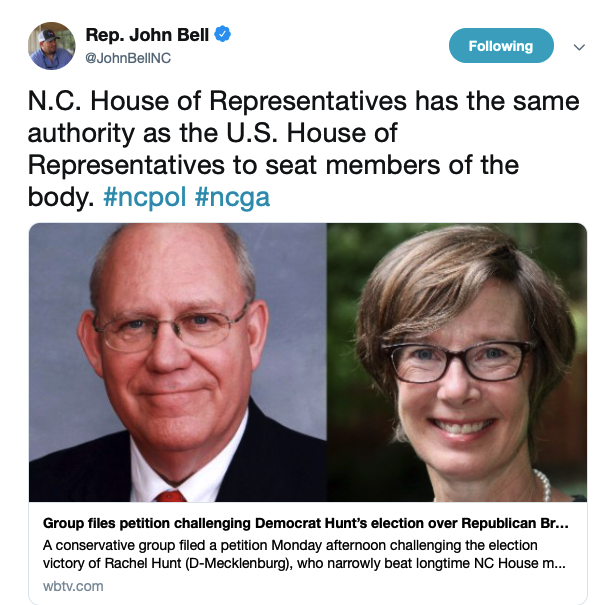