We heard some pretty strong language from NCGOP executive committee member, and former Lee County commissioner, Jim Womack regarding the current controversy at NCGOP HQ.  Well, Womack is back: 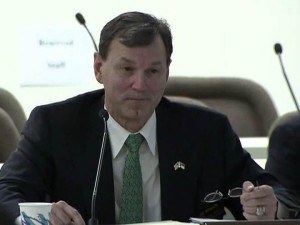 I suppose most of you received this note from the Raynors, as well as the Scott Cumbie petition in the mail.  I wanted you all to know I am TOTALLY opposed to signing any such petitions and that I still completely support our Chairman.  If any of you have any reservations about Hasan, please let me know.  I’d like the opportunity to explain why I think it is imperative we give him the most vigorous assistance we can muster.  No one, including Hasan Harnett himself, is claiming that Hasan hasn’t made some errors of omission and commission- we all do from time to time.  But, it is patently clear from Cumbie’s letter that the Central Committee has been colluding and plotting to disenfranchise and get rid of Hasan for many weeks.
If anyone needs to be let go, then it should be the Central Committee members who are overstepping their authority as laid out in the Plan of Organization, without first getting a nod of approval from the Executive Committee that put them where they are.  We elected Hasan Harnett as Chairman and now the Central Committee is plotting and conspiring to oust him.  I take that as a direct affront and insult to the Executive Committee and all active Republicans, statewide.
Until someone produces hard evidence Hasan has broken the laws of the state of North Carolina, or until he is indicted for breaking the law, we should

treat him with the dignity and support he so desperately needs in doing his job for all of us.  I will continue to ask for the resignation from the Central Committee for anyone who colluded, conspired, or secretly coordinated to suspend Hasan’s email accounts, to prevent Hasan from having access to state GOP files and data, or to remove Hasan from his elected office.
Warm Regards/

2 thoughts on “NCGOP official doubles down on Hasan-gate”