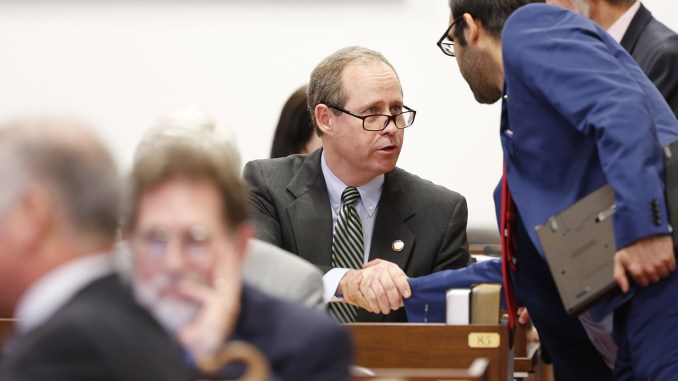 […] State Representative Dr. Greg Murphy has written a letter-to-the-editor addressing the political rhetoric that seeks to undermine common sense Republican legislation that would provide health insurance for over 300,000 hard working North Carolinians.  Murphy, the only physician in the State Legislature, sponsored House Bill 662, known as Carolina Cares. This legislation seeks to provide a state run, third party administered, health insurance plan for North Carolinians who fall in today’s coverage gap. It provides for those who earn too much money to qualify for Medicaid, but cannot afford the skyrocketing cost of privately purchased health insurance.  […]

Here is the full text of Murphy’s letter to The Greenville Daily Reflector.   Here is the Carolina Cares bill.   MORE:

“Carolina Cares is a conservative and fiscally responsible alternative to Medicaid expansion that would not add a single person to the already 2 million North Carolinians on the Medicaid rolls. It is an entirely different insurance product” Murphy states in his letter.

In an effort that will create further governmental dependency, Governor Roy Cooper and other prominent North Carolina Democrats have made Medicaid expansion a top priority this legislative session. In contrast, House Republicans have offered Carolina Cares, which would provide a health product centered on cost efficiency, self-reliance andas well as healthy living principles that the majority of those in the coverage gap welcome. Once implemented it is calculated to save North Carolina millions while helping care for those in the coverage gap. Murphy points out that Governor Cooper and others are attempting to gain support for expanding Medicaid by incorporating some of the most popular elements of the Carolina Cares bill into their talking points.

“Governor Cooper is hijacking the common sense provisions of Carolina Cares in an attempt to justify his desire to expand Medicaid. They are two totally different entities and weaving them together is misleading and disingenuous. Carolina Cares does not expand Medicaid and I do not support any expansion of this already bloated program”Murphy states. “Medicaid expansion seeks to add yet another group to the total dependency of a government program.  Carolina Cares seeks to form a partnership with these hard working North Carolinians who are looking for a helping hand, not a hand-out. “

Murphy notes that Democrats nationwide have been pushing state legislatures to expand Medicaid programs and to oppose more private sector approaches, as Democrat leadership believe it serves their agenda better to have those insured 100% dependent on the government for their health insurance.

“These hard working folks would gladly pay their fair share.  In fact, the goal would be to move them back to the private sector to get their insurance as soon as they can financially afford to do so”Murphy said. “It’s upsetting enough that the Left are attempting to misrepresent Carolina Cares in order to push their big government agenda, but to use these citizens healthcare as a political pawn in that effort is outrageous.  It’s time to stop playing games and do the right thing”.

Carolina Cares would provide a health insurance product created and managed in North Carolina, one whose elements closely resemble private insurance or North Carolina’s State Health Plan. In Carolina Cares tax dollars do not enter the Medicaid system and thus, there is no expansion of the Medicaid dependency cycle. There are low and affordable income-based premiums required under Carolina Cares. There is also an ongoing work requirement. Murphy believes these elements of personal responsibility give Carolina Cares an important partnership of affordability and accountability that so many government programs lack.

In one of the hardest hitting portions of Murphy’s letter he notes “… it is the extreme political Left’s pushback to Carolina Cares’ Personal Responsibility requirements that are the stumbling block to getting these folks the health insurance they seek. The individuals who are aided by legislation welcomed an active buy-in to their health care. Yet those who champion big government bureaucracy are willing to use health care as a bargaining chip in order to bring more individuals under the federal government’s ever-expanding umbrella. They wish to create more governmental dependency rather than promoting self-reliance. The Left would rather these citizens go without health insurance and continue their hardships then have them pay just a small portion of the costs themselves.”

The messaging effort on health care on the GOP side has been, to be kind, screwy.  Many GOP legislators are under the impression the Carolina Cares bill is Medicaid expansion.   Raleigh’s  John Locke Foundation challenges Murphy’s assessment by declaring that Carolina Cares will indeed add to Medicaid rolls.

Actually reading the text of the bill makes you think otherwise.   I’m generally not a big fan of government sinking its claws into anything  — health care or otherwise.  But you have to hand it to Murphy for at least: (1) trying to talk to us straight, and (2) attempting to address a big problem affecting a wide swath of people across this state.