In a letter published to the members of the Moore County Law Enforcement Officers Association Thursday, the current President Bob Temme announced he is pursuing election to the North Carolina House of Representatives in District 52, encompassing the majority of Moore County.

Temme, a Republican, will be running in the primary race against incumbent Rep. Jamie Boles if he decides to run again.

Temme is currently the Southern Pines Police Chief, serving since December of 2012. Temme has over thirty years of law enforcement experience, thirty years of firefighting experience, presently serving his third term as the President of the Moore County Law Enforcement Officers Association, member of the North Carolina Chiefs of Police Association and is an Assistant Professor for the State University of New York.

As a Lieutenant with Stamford Connecticut Police Department, Temme was instrumental in the implementation of multiple Community Policing programs and the “Compstat” crime accountability process. In addition, Temme has held supervisory positions in the Patrol Division, Detective Division, Narcotics Division and was the Commanding Officer of a Prisoner Processing and Detention Unit.

Temme was the Chairman of the Aviation Department for the State University of New York at Farmingdale New York, and continues to instruct in an online curriculum for both the Aviation and Criminal Justice Departments. He has served the State of North Carolina as the Manager of the Center for the Prevention of School Violence for the North Carolina Department of Juvenile Justice with a primary focus on both pre-incident planning and prevention of school violence.

Temme graduated from Nassau Community College with an Associate of Science degree in Criminal Justice, State University of New York with a Bachelor of Science degree in Management, and Dowling College with a Masters in Business Administration. He holds a Federal Aviation Administration commercial pilot rating and is a graduate of the F.B.I. National Academy in Quantico, Virginia.

“I am confident in my ability to bring positive and lasting change to Moore County,” said Temme in the letter.[…]

The GOP primary winner gets the honor and pleasure of facing off against space alien Lowell Simon (D) in the general election. District 52 is a safe Republican seat.  The winner of the GOP primary is almost certain to be seated in the House. 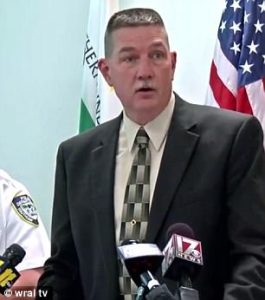 Why are gas prices higher in Moore County? That question is one of three key issues that Bob Temme said he’d like to see addressed.

The Southern Pines police chief and registered Republican announced his intent to run for the state House District 52 seat last week. In doing so, he has set up a potential primary challenge to longtime State Rep. Jamie Boles. Boles has indicated he intends to seek re-election but has not made any announcements.

Filing for 2020 races begins in December ahead of a March 2020 primary.

Temme said that he is not chasing any political agenda but rather relying on voters to help him identify needs and challenges. State House District 52 encompasses most of Moore County.

“When people ask me what my opinion is, my response has been, ‘My opinion doesn’t matter.I have goals, but it is more about what is your opinion,’” he said. “In this role, I am supposed to represent the people.”

Moore County’s gas prices, which typically are several cents a gallon more than surrounding counties, have been an unresolved topic for several years. On any given day, locals can sometimes expect to pay more for gas than drivers visiting fuel stations in surrounding counties.

In 2015, the Moore County Board of Commissioners asked Roy Cooper, then the state’s attorney general, to investigate allegations of price-fixing in the Sandhills.

Catherine Graham, then-chairwoman of the board, said the county commissioners stopped receiving updates about the investigation in early 2016.

“We got nowhere,” Graham told The Pilot last year. “As far as I know, it kind of died in the water.”

According to the local American Automobile Association (AAA), the higher prices reflect market conditions and a lack of competition between fuel stations to lower what they charge.

Temme said gas prices are one of a handful of issues that have been brought to his attention that he’d like to see re-explored.

Another priority is the state’s tier system, which ranks the economic well-being of its 100 counties. Tier 1 and 2 counties receive more financial assistance from the state, while Tier 3 counties, like Moore, have a portion of tax revenue funneled off with nothing returned.

“Nobody is talking anymore about the tier system. At the same time, our taxes are going up, so obviously we need more revenue,” said Temme. “I just don’t understand why this is not being talked about anymore. I’m in these other counties where our money is going, with my job, and they are not getting better. I want to fix this and not just write it off.”

Temme said it’s important for elected representatives to be accessible and responsive to local concerns.

“I am a resident of the state, but I don’t represent the state. I intend to represent District 52.”

However, he acknowledged his third priority, while responsive to the community’s interests, is also personal: taking a closer look at public safety legislation.

“I don’t think we need new laws, and the laws we have are being enforced. The system falls apart with prosecution,” Temme said. “If we are going to get our hands around school safety that is real — not just talk — I am well positioned to do that.

“I have seen things that come down with no teeth that are more about politics. What we need is more substance.”

With 30 years in law enforcement under his belt, Temme said he’s ready to embrace the next chapter of a “lifetime career of public service with great ambition and ideas.”

In a letter sent last week to members of the Moore County Law Enforcement Officers Association (MCLEOA), an organization he has led as president for three years, Temme said he is confident in his ability to bring positive and lasting change to Moore County.

If elected, Temme has said he would step down as president of the local law enforcement association and would resign from the town of Southern Pines, to focus his energy solely on serving the interests of District 52.

But he has no plans to drop the “Chief” honorarium from his name.

“Public safety is very big for me,” he said, noting that he also identifies himself as a conservative Republican. “I tell my rookie officers two things when they come in the door. If you know the Constitution and the Ten Commandments, you can look everything else up.”