The Democrat Party isn’t the biggest threat to this country and this state.  It’s deep-pocketed powerful individuals ready to buy off whomever is currently in charge so they can pocket even more of OUR money:

A solar industry group solicited campaign contributions for a senior Republican legislator in an email to its members and tied the request for funds directly to action he had taken days earlier on a bill opposed by the group.

The request came from the North Carolina Clean Energy Business Alliance on behalf of State Representative John Szoka, the North Carolina House Republican Conference Chairman and chairman of the House Committee on Energy and Public Utilities.

Chris Carmody, the executive director of NCCEBA, asked the organization’s members to make a contribution to Szoka of up to $5,200—the maximum contribution allowed under the law—in an email sent August 21.

The email singled out Szoka and a second lawmaker for their opposition to Senate Bill 559, a controversial bill introduced this legislative session that would authorize Duke Energy to set energy rates for a multi-year period with relaxed oversight from state regulators.

Carmody’s email said Szoka and the second lawmaker had dealt a “body blow” to SB 559 and championed other legislative priorities supported by the solar industry.

“What can we do to defend our champions?” Carmody’s email asked.

Your “champion”?  I thought he was elected to represent the interests of the good folks of Cumberland County.

“In today’s attempt to pass this bill, Duke Energy made no changes to SB 559. Instead, Duke Lobbyists simply threatened legislators that the company would seek revenge in the upcoming campaign season. We need to be prepared for Duke’s efforts to unseat renewable energy champions. Here’s what your company can do: 1) Contribute directly to Rep. Szoka: Sept. 25 at Solar Power International, we will be holding a joint reception with SEIA for Rep. Szoka and South Carolina Senator Tom Davis, an important reformer in our field (invitation for the Szoka portion of the event attached). If you aren’t attending SPI, please send them a contribution<http://www.szokafornchouse.com> with the notation ‘NCCEBA Member.’”

By law, lobbyist principals—who are considered limited contributors for purposes of the statute—are prohibited from soliciting campaign contributions for legislators—referred to as limited contributees under the law—while the general assembly is in session.

“No ‘limited contributor’ shall solicit a contribution from any individual or political appointee on behalf of a ‘limited contributee,’” during the legislative session according to the North Carolina State Board of Elections’ campaign finance manual.

The legislature has remained in session since January, as Republicans face a budget stalemate with Governor Roy Cooper, a Democrat, over the budget.

A spokesman for the NCSBE declined to comment for this story, pointing to the fact that the investigation raises issues that could later come before the board.

Carmody declined to answer questions on-camera for this story but sent a statement to WBTV confirming the August 21 email.

“As you note in your request, my email of August 21, 2019 was made on behalf of the North Carolina Clean Energy Business Alliance. As a 501(c)(6) organization, more commonly known as a professional association, we are permitted to communicate with our members on any subject,” Carmody said.

Carmody did not specify which provision of the law he was relying upon in referencing the carve-out for professional associations that employ lobbyists to solicit campaign contributions on behalf of a lawmaker during session.

Szoka parroted Carmody’s statement in an interview with WBTV.

“I believe the Board of Elections has ruled previously—at least they have told me that—that for an executive director of a professional association to communicate with their members, that it’s OK,” Szoka said, without specifying who ‘they’ referred to.

In the interview, Szoka said he did not coordinate with Carmody ahead of his email soliciting campaign contributions to his campaign.

“I did not ask him to do that. There were no lobbyists involved, so, obviously, I can’t control the actions of anybody,” Szoka said.

Szoka pledged to return any campaign contributions his campaign received as a result of NCCEBA’s solicitation if the board of elections finds the solicitation was illegal.

Hmm.  Investigating someone who has a lot of say over your operating budget.  (*Gee, I wonder how it will go.*) 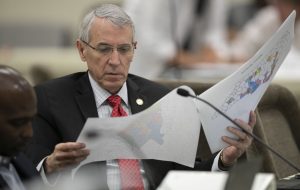 The state elections board JUST cleared (unanimously) the Robeson County Board chairman who made about 100 contributions to various candidates (including ONE running in her county) while serving on the board.  I’m not holding my breath waiting for that big bag of uselessness to do the right thing.

4 thoughts on “#ncga: Solar goons tighten their grip on ANOTHER ONE.”