Inquiring minds WANT TO KNOW:  Is Speaker Timmy already screwing over a significant number of members of his caucus?  Apparently, so.

Tim Moore was one of a number of legislators who signed a letter last week seeking the closure of Amazon’s massive boondoggle of a wind farm over in eastern North Carolina.  Moore and his cronies in the House Republican caucus have been fattened up with cash from solar energy sources — who obtain government money, then turn around and load up politicians with it in the hope of getting even MORE MONEY.   The solar energy mandates at the state level are up for renewal this year.  The solar goons spent heavily and bet big on Speaker Timmy and his team in November.  You can BET that those chits are already being called in.

Solar and our state legislators have had a lucrative win-win relationship.  Why couldn’t the wind power folks try the same?  Speaker Timmy and the boys DO love cash.

Look what turned up on Facebook a short time after that letter protesting the wind farm went out: 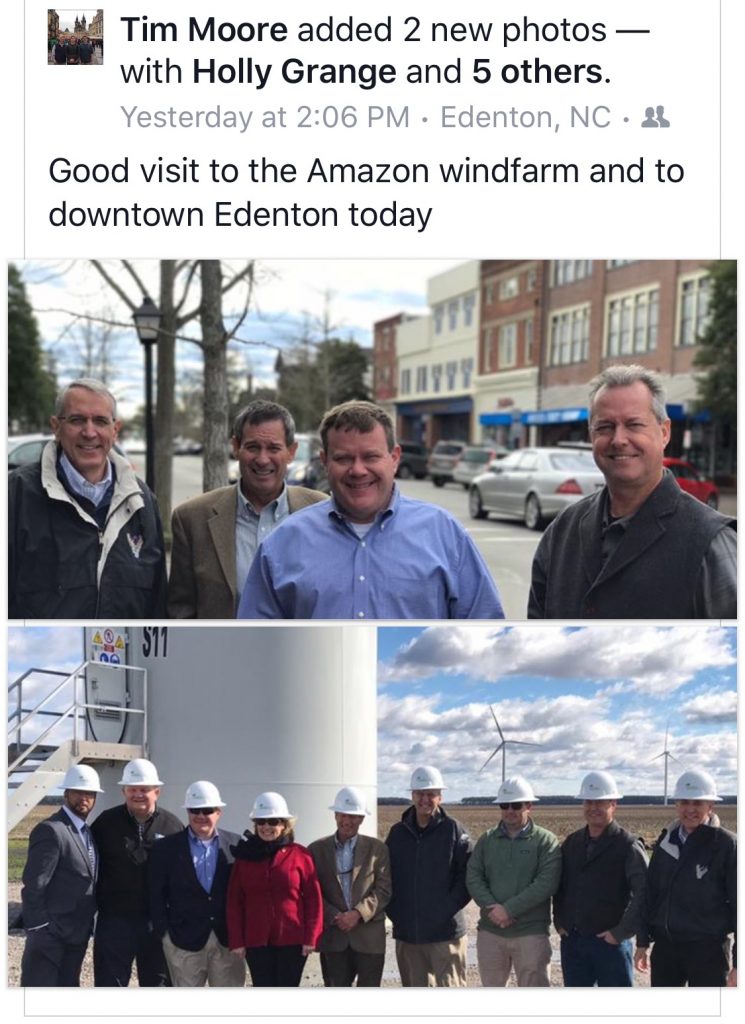 If THAT is not a group that got its pockets fattened, I don’t know what it is.  Wind Power is about as bad as solar is in terms of being a waste of money and undependable.  Here’s a pretty thoughtful analysis of wind power from the UK:

While the arguments for wind power seem straightforward and compelling, Wind power would reduce our dependency on foreign oil, wind power is clean and would allow for the shut down of dirty fossil fuel fired power plants.

Wind power would reduce greenhouse gas emissions. Investment in wind power quickly pays for itself.
These arguments sound all too powerful and all make sense. Or do they?
First, there is the notion that somehow wind power will reduce our dependency on foreign oil. This hope is hinged on the prospect that wind power will somehow replace fossil derived electric power.
The problem with this theory is that wind is so unpredictable that anywhere from 80% to 100% of whatever new wind power generation is brought on line must still be backed up with standard generation facilities that can be counted on for their reliable power.
In the event there are not enough existing standard generation facilities in place, new ones would have to be added. Otherwise, the level of reliability of power availability would be jeopardized. Thus, we would be paying for two power generation facilities – the good, old-fashioned, dependable, dispatchable power plants, and the new, unpredictable, undispatchable wind power plants that may or may not operate, depending on how much wind is blowing.
Second, clean wind energy will be able to replace or retire dirty power plants. This too is not borne out by experience. Since the dirty reliable power must remain on standby to backup the new unpredictable wind power, there is virtually no reduction in the use of dirty power plants or the dirty fuel they burn.
In fact, when fossil-fired power plants have to be backed off to permit wind power as the primary generation mode, fossil plants burn their fuel less efficiently. In addition, when fossil plants must cycle wildly in response to erratic wind powered electric generation, they produce even more emissions, because non-steady-state

operation is inherently less efficient, producing more emissions than steady-state operation.
Third, there is the prospect that wind power would reduce the effects of global warming by reducing greenhouse gas emissions. This prospect falls apart when you look at the facts.
Nature produces more than 29 times more CO2 than does mankind. Water vapor produces more than 26 times more of a greenhouse gas effect (GGE) than does CO2 (methane, nitrous oxide and CFCs account for less than half of the GGE of CO2). Fossil fuel burning accounts for 40% of all electrical generating power.
Thus, if 20% of our electrical power was replaced with wind power, the reduction in greenhouse gases would be of the order 0.00948%.
Fourth, wind energy is free. Well, not exactly. Wind turbines are always consuming electrical power to keep their own auxiliary systems functioning, whether the wind is blowing, or not.
All the publicity regarding wind power concentrates on the power it produces, if it is producing any at all. Few people are aware that wind turbines consume electricity, whether they are operating, or not.
Fifth, is the claim that wind power pays for itself. If this were the case, then why do they require subsidies to be brought to market? The only reason these things get built is upfront tax benefits for the developers.

After these benefits are exhausted, developers have no incentive to hold onto these projects, and cannot wait to unload them.[…]

Sound familiar?  Sounds a lot like the arguments against solar energy.  Yet, Jones Street found a way to get that crowd onto the state government teat in exchange for some fatter wallets and bank accounts.  It’s pretty clear — if we don’t lay the smack down early and hard — these whores in the legislature will find another teat for this wind power crowd to latch onto.

7 thoughts on “#ncga: Tilting at windmills”