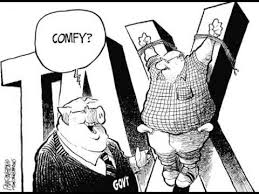 I took a look at that bill –portrayed in the media as a gas tax cut — that is really a gas tax hike.  It lumps all kinds of changes to the state’s Internal Revenue Code in with the gas tax changes.  (It really bothers me to see MY senator, Jerry Tillman, listed as a primary sponsor on this thing. ( “Tax Hike” Tillman? )

One Republican senator — who voted for this ”dog” — griped to me:

”Leadership put a mish-mash of stuff together in this bill.  If you didn’t like the gas tax provision, you could vote against the bill.  But you would also be voting down some provisions desperately needed by the Revenue Department for tax collection purposes this year.  Republicans would have been on record basically sabotaging the funding of state government.  This is not right, putting us in a bind like this. They have been doing it in the House.  And it’s being done more and more in this chamber.”

The House will likely take up the gas tax hike this week.  For those keeping score, this is how the vote broke down in the Senate:

Basically, we’ve got the WHOLE GOP caucus on record FAVORING jacking up the gas tax.  (I saw a quote from Senator Tamara Barringer (R-Wake) regarding her NO vote.  She said her objection was based on items OTHER THAN the gas tax.  So, she does not get a pass here.) It’s sad to see the Democrat caucus voting more conservatively than the GOP caucus.

Put some heat on your House members, folks.  This bill is a dog.  NO ONE beyond the Chamber and League of Municipalities wants this.  If this legislation fails to get a majority in the House, it’s done.  Right now, it’s not a given that it will have majority support in the lower chamber.

They are trying to hand Pat McCrory $45 million in corporate welfare.  They won’t defund the corporate welfare slush fund known as Golden Leaf.  They’ve ROBBED the highway trust fund — powered by gas tax revenues meant for use in road repair and construction.  Yet they are ready and willing to shake us down for MO’ MONEY to fund a bunch of  road work that is really payback to some big political supporters.

2 thoughts on “#ncga: The era of ‘tax-and-spend’ Republicans”