The recent murder of three students in Chapel Hill handed the drive-bys exactly what they were looking for.  Ammo for whipping up hysteria over ‘racism.’  They tried with George Zimmerman and Treyvon Martin.  They tried with the incident in Ferguson, and the one in Staten Island.  So far, they’ve had ONE BIG goose egg.

Even McClatchy’s own in-house geriatric RobRielleWHO? has vomited out a column about a “new focus on lynchings” in North Carolina.  Stir the pot.  Scare people to death.

Now, the People’s Republic of Chapel Hill has handed the drive-bys a plum:  a white guy with a bunch of guns who killed members of a ‘protected’ minority.

The drum circle crowd in Carrboro has geared up.  We’ve got campus demonstrations all over the state.  The Round Rev has labeled it a hate crime and demanded a federal probe.  (So has the idiot mayor of New York.)  The spin is that the Tea Party and talk radio have whipped up so much anti-Muslim fervor that it cost these three Syrian Muslim students their lives.

Never mind that at least one of the victims compared Israelis to Nazis.  Never mind that the father of one of the victims has radical Muslim affiliations. In the minds of the drum circle crowd AND the drive-by media, only TWO THINGS are important:  (1) this suspect had a bunch of guns and a conceal-carry permit, and (2) he was a white person who killed members of a racial / religious minority. 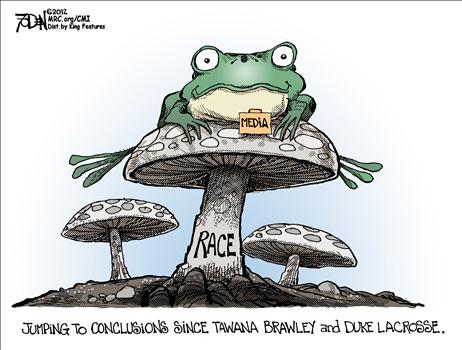 Never mind that you have a whole lot of hardcore Muslims around the world doing, and expressing support for, things like tossing gays off of rooftops, and stoning women who dare to drive a car or leave the house without head cover.  (You know, the kind of activities the drum circlers and the drive-bys regularly try to accuse the Tea Party of.)

Don’t get me wrong.  This was a terrible crime.  It needs a proper hearing within the criminal justice system.

It’s quite a delicious irony that Chapel Hill — of all places — has found itself in the sights of the racism-seeking, racism-fabricating drive-bys.

But let’s not get the drive-bys get away with this kind of thing.  Do some research on the Internet and other independent sources before forming an opinion based on presentations from the drive-bys.  Stop watching or listening or subscribing to the drive-bys.   It’s not the Tea Party threatening American society. It’s the lazy liars, ideologues, and Al Sharpton and Bill Barber-coddlers in the drive-by media. They don’t deserve one minute of your time or one penny of your hard-earned money.