I’ve been hearing some grumbling about former House majority leader Edgar Starnes’s (R) decision to give up his House seat and skedaddle over to state treasurer Janet Cowell’s (D) team.

I didn’t know much about Starnes before he ascended to the leadership. But this video — in which he completely pisses off Blinkin’ Chris & co. — helped him score major points with me.

Starnes did offer up a public explanation for this post-election decision to resign his seat:

[…] Rep. Edgar Starnes, R-Caldwell, said he’ll resign his seat at midday Tuesday, the day before lawmakers return to Raleigh for a one-day housekeeping session. On Wednesday, he’ll begin his job as senior policy adviser for Cowell, a Democrat, and serve as her liaison to the Republican-led legislature.

Starnes, who served one term in the 1980s, then continuously since 1997, won his 11th term in November unopposed. He also previously served as a chairman of the House Finance Committee.

“I probably accomplished as much as I hoped to be able to accomplish and so at some point in time you have to realize it’s time to move on and find new challenges and new opportunities, and I look at this as a challenge and an opportunity,” Starnes said in an interview.

He said discussions with Cowell’s office about the job increased around the time of the election, so he decided not to seek a second term as majority leader in late November. Starnes said his hiring was finalized about a week ago. […] 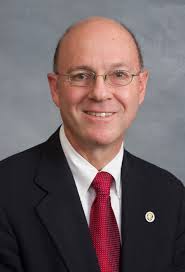 My sources in the House were rather disappointed with Starnes’s performance as majority leader.  They all agree he is a nice guy, but said he was very easy to dismiss and basically run over.

There was some speculation that Starnes might try to run for speaker after Thom Tillis’s departure for DC.  But, as one Republican legislator quipped to me: “Ol’ Edgar can’t even keep Grandma Julia Howard in line.  How in the hell can you expect him to run the whole House — much less the Republican caucus?”

My understanding — supported by my GOP caucus sources — was that there actually was little to no interest in giving Starnes an encore as majority leader.

If we’re to believe Starnes’s spin that he had accomplished as much as he had hoped to accomplish, WHY did he run for reeelection?  WHY not announce your retirement prior to the May primary, so local voters can make a decision on who holds that seat for the next two years?   I’ll answer that FOR you.  It appears Starnes waited for the right time so that the governor and party insiders could pick his successor.  And it appears Starnes’s desired successor is his wife.  If it all works out, Mrs. Starnes will get appointed and be able to run for reelection — as an incumbent — in 2016.

I think the real story here is that Starnes was having a hard time adjusting to the idea of going from House majority leader and a powerful committee chairman to merely a run of the mill House member.  He saw an opportunity for a different direction, and took it.