It’s one thing to disagree with someone’s stands on the issues.  It’s another altogether to smear someone with falsehoods and half-truths while pretending to be an objective observer and reporter of the news.   Laura Leslie tried to tie vulgar tweets to Rep. Chris Millis — originating from a PAC that Millis had not been involved with in over a year.

Okay.  Let’s look at that analogy.  We’ve got Chris Millis — a white conservative Republican — questioning the legality of the alleged actions of secretary of state Elaine Marshall — a white, wrinkled far-left sourpuss whack-job.   How does “white supremacy” play into this story?  (Perhaps all of the brown people from south of the border, in the country illegally, that were certified as notaries by Marshall’s office?)

Let’s let Rob “Rielle Who?” Christensen — Raleigh driveby journalism’s very own “Bernie” — explain this to us:

When a state House committee took the first steps toward an impeachment inquiry of Secretary of State Elaine Marshall last week, it opened the door into a dark, partisan corridor of North Carolina history.

Impeachment has a disreputable history in Tar Heel politics, having been used by white supremacists to help suppress black participation in the electoral process.

Impeachment was used to oust Republican Gov. William W. Holden in 1872, making him the first governor in American history to be impeached, convicted and removed from office. In 1901, the state House voted to impeach two Republican state Supreme Court justices, but after a 14-day trial the Senate voted to acquit. In both cases the subtext was race.[…]

First of all, what does this have to do with Millis’s allegations against Elaine Marshall.  Second of all, the 1872 stuff was perpetrated by DEMOCRATS — cheered on by Rob’s paper and its then-owners — against Republicans seeking to give blacks a fair shake.  (Rob won’t tell us about that.  Just like he never got around to mentioning the blonde with the camera following John Edwards around.)

The subject of impeachment arose last week when a Republican-dominated state House committee approved a resolution to see if impeachment proceedings are warranted against Marshall, a Democrat.

It is hard to know how seriously to take the impeachment push.

Is this the effort of one young, conservative firebrand, Rep. Chris Millis, a civil engineer from Hampstead, or does it have more legs than that?

Millis charges that Marshall’s office illegally commissioned 320 noncitizens as notaries over nine years. Marshall responded that this was a political attack. Her office said that a U.S. Supreme Court decision made it improper to make citizenship a requirement to receive notary commissions.

The idea of impeaching a public official over an interpretation of who is eligible to be a notary may seem like small potatoes.

But consider what the Democrats tried in 1901. After winning control of the legislature in 1898 and the governorship in 1900 by running two vicious white supremacy campaigns, the Democrats were preparing to pass laws both disenfranching black voters and imposing Jim Crow laws.[…] 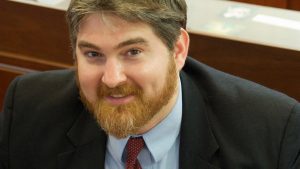 Rob goes on to give us details about the Klan running wild across the state.  Again, what does this have to do with Elaine Marshall flouting immigration law in 2016-2017?  (Easy.  It’s a little bit of guilt by association. Bigoted legislators went after a statewide elected official in 1872.  And here they are trying it again. Facts be damned.)

.  People who have interacted with the gentleman from Pender know that it is a real stretch to attempt to tie him to either of the scenarios painted by Leslie or Christensen.  Hopefully, Millis will stand strong in the face of this crap