Jihad?  We’re supposed to be offended by a senator characterizing the driveby media as a bunch of maniacal out-of-control radicals bent on causing as much pain and destruction as possible for people they don’t like?  *Damn, it must really have been a slow news day.*

There are all kinds of substantive stories to be covered on Jones Street.  (Many of them are already on our site.)  It’s just downright pathetic that the drive-bys have been reduced to trolling social media accounts of Republican politicians.

Colon Campbell is moving up in the world over at McClatchy-ville.  He’s moving out of the men’s room and from behind The N&O’s paywall and dwindling circulation  to The Insider — an even more expensive, lightly read web site hidden behind a paywall.  And here lil’ Colon is — not exactly wearing out shoe leather, but firing up his smart phone to troll social media. Gosh that’s hard work.  *Imagine if Woodward and Bernstein had Twitter and Facebook back in their heyday.*

(Apparently, Democrats don’t ever write anything newsworthy or scandalous on social media.)  Eventually, someone will let McClatchy know that we don’t need them to tell us what’s on social media.  (We can go check it out ourselves.) 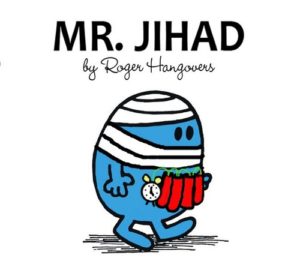 With all of young Colon’s “outrage” over senator Bishop’s “jihad” commentary, we’re reminded of the complete lack of outrage over the social media lunacy penned by Colon’s colleague from WRAL, Laura Leslie.  Ms. Leslie blamed a massacre in a gay bar in Orlando, perpetrated by an actual jihadi, on Christian conservatives here in North Carolina.  She suggested that watching a GOP presidential debate was nausea-inducing, and warned us all to beware the “Crazy MFers with guns.”

Yes, she still has a job. Yes, she’s still out there covering Republicans and conservatives.  Yes, she’s still overseeing something in the legislative press room called the “NCGA FUBAR” meter.  (One has to wonder if that FUBAR meter will still be around if there ever is another Democrat majority.)