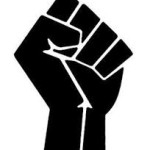 You never would have imagined a pampered, latte-sipping, Prius-driving, pale-faced suburban princess like Tricia Cotham being in solidarity with Malcolm X, Louis Farrakhan, Jesse Jackson, Chuck D, Flava Flav, and that fun-loving gang over at Black Lives Matter. But, yes, lil’ Tricia appears to be leaning on the hard times she had growing up in Mama Pat’s house to empathize with the young sista interacting with a police officer in this video:

Um, sweetie, WHO is doing that?  (While we’re at it — stop criminalizing cops without providing the due process we’re ALL entitled to.) 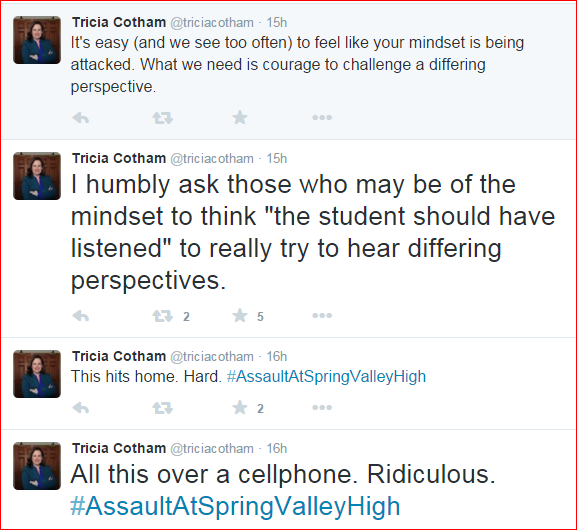 The video hits home?  Spend a lot of time back-talking teachers and cops? 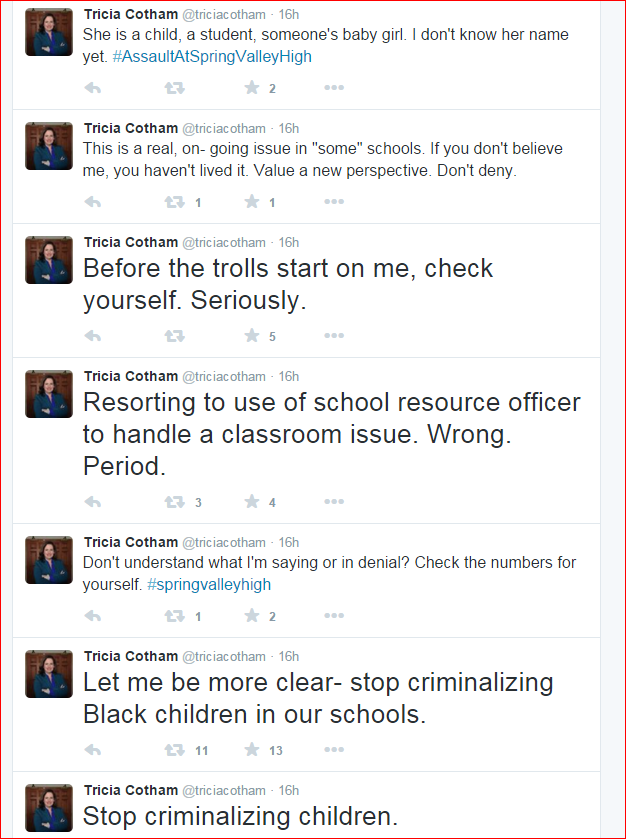 The video Tricia found on the Internet does not include any audio of any discussions that occurred just before the incident.  *Surely, it was full of ‘yes,sir’ and ‘no, sir.’*

Perhaps it went a little like the discussion at the start of this video.    We don’t know.

But here we have someone — charged with making laws in North Carolina — already out there pre-judging someone based on a short video pulled off the Internet and selectively edited by the drivebys.

There are a lot more good people in law enforcement than there are bad.  (I know. As a driveby journalist, I took on a corrupt sheriff and his department for years.  The sheriff and half of his deputies ended up getting federal prison time.)

I believe that responsible people should make judgements based on the full set of facts.  I covered court cases all the time for print media. I’d go home after court and watch the TV news.

The TV drivebys would broadcast details that had been withheld from the jury or the jury had been instructed to disregard.  (If you had sat in the courtroom, you would have known that.) Then, when the verdict comes out, the public can’t understand it.  After all, look at what they saw and heard on TV!

I will be the last one to second-guess a cop or a soldier in a combat zone.  In both cases, those folks will face split-second decisions that will result in either (a) them dying or being injured, or (b) someone else dying or being injured.  The politicians and the lawyers put them both in impossible situations and hamstring them in terms of the responses they can offer in hostile situations.

I have a friend in law enforcement.  He was involved in a shooting one night during a drug raid.  (The “victim” of course, was a suspect of another race.) My friend told the guy to stop and ID’ed himself as police.  The suspect ran out of the house and into a dark and wooded area.  My friend pursued with gun drawn.  He yelled at the suspect to stop and freeze several more times.  The suspect did not.  At one point, the suspect spun around toward my friend with something in his hand.  It was dark.  My friend had a few seconds to determine whether he was about to be shot at. My friend shot the suspect.  It was later learned that the suspect had something other than a gun in his hand.

He ran from the police.  He ignored orders to stop several times.  He spun around to face the officer in a threatening manner.  Should my friend have waited to see if this guy would fire first?

My friend is still haunted by the event.  He, like most people, doesn’t find shooting people to be pleasant.  Of course, the race-baiters vilified him in the community.

It’s really easy to second-guess folks like this when you are sitting in the comfort of your suburban living room.

Tricia is also wrong to make age an issue here.

Kids are getting meaner and meaner.

When I was in high school — in the mid 80s — it was SHOCKING to see a police officer on campus.  SHOCKING. Now, it’s as normal as seeing the lunch ladies.

Tricia should try talking to some public school teachers who regularly get told: ‘He’s yours between 7:30 and 3:30. You fix him.’   My dad would have drop-kicked me to the moon if a teacher had ever called him about my behavior in class.  Now, we have way too many parents all too ready to delegate parenting to the Department of Social Services or the public school system.

Instead of worrying about this kid who disrupted the class and had to be removed by a cop, why not focus on the kids in the room who likely wanted to honestly learn something?  Too much of school funding is based on how many butts are in chairs.  Delinquents are tolerated in order to keep the cash coming — to the detriment of the kids who really want to learn something.

This episode in South Carolina needs to be investigated more thoroughly by people a lot closer to the situation, and more responsible, than lil’ Tricia.  People in positions like Tricia’s need to take action to make parents more accountable for the behavior of their lil’ darlins’.  Schools need the power to adequately deal with troublemakers who disrupt the otherwise good work going on in those buildings and who make things harder on teachers and the students who want to learn.

7 thoughts on “#ncga: Lil’ Tricia is DOWN WITH THE STRUGGLE”