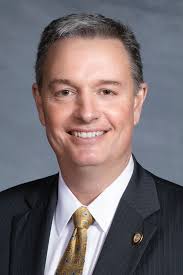 Methinks Henry Hinton and I gave the freshman Republican senator from Kinston  a wee bit too much credit.   I got the impression from listening to Henry’s Greenville-based radio program that Perry was allied with majority leader Harry Brown to limit the expansion of wind turbines to protect the state’s military bases.

Apparently, he’s NOT.  Apparently, Perry is marching in lock-step with Crazy Bob Steinburg, reading from the Gospels of Paul and Dee, and  praying to the false gods of  government mandates and subsidies. 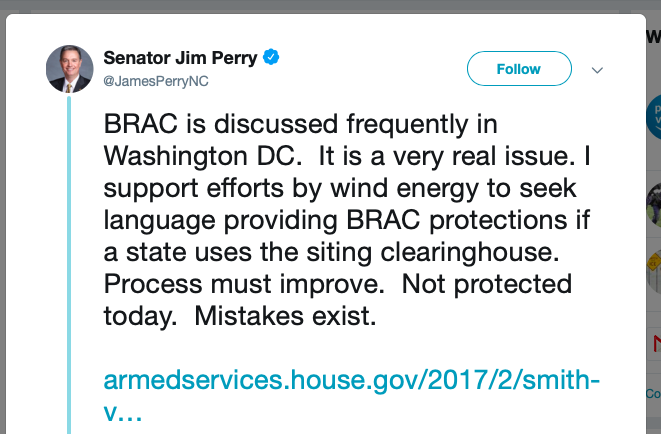 Sooooo —  the needs of your campaign contributors and lobbyist pals outweigh the national security concerns of this country?  *Nice.*

In other words, he’s supporting federal legislation protecting bases from being closed if windmills and solar panels are thrown up close by them.  (Gosh, he’s earning those payoffs.) 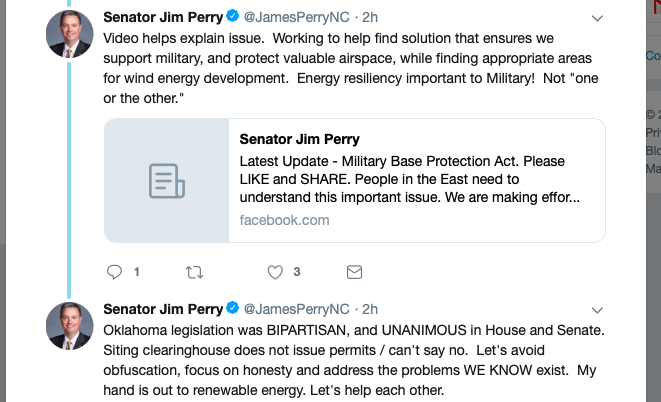 How much more help do we need to toss the “renewable energy” crowd?  You guys on Jones Street MANDATE that electricity providers BUY from the wind and solar goons.  You’ve got all kinds of freebies and giveaways for the people in this industry.  What’s next?  Completely exempting them from ALL state taxes?

I don’t hear Perry talking about getting these solar and wind guys OFF the government dole and standing on their own.  Saying stuff like that is a good way to cut off the $$$$-gravy train.

The “renewable energy” industry could not survive without welfare assistance from the government.  It is unreliable.  And it doesn’t supply near the quantities proponents claim it does.

Politicians are all for it because it puts cold-hard-cash in their pockets.  (After taking it out of our pockets.)

This is the kind of crap that makes one indifferent to whether we have a Republican majority in the General Assembly.  You’ve got a different cast of characters running the show, but you’ve got the same old chicanery, sleaziness, and big government you get with the other guys.  Talk about a NO-WIN situation.