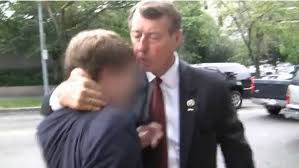 It appears that state Senator Jeff Tarte likes to dish it out, but sure can’t take it.  He worked overtime spinning negative stories about Greg Brannon during the 2014 US Senate primary. Jeff apparently finds it to be a lot of fun to embarass someone publicly.

But just try to ask him some pointed questions, and he just FLIPS OUT.  Exhibit One: This video shot by guerilla cameraman Chuck Suter.   Granted, Chuck can be a bit in-your-face.  But, if you watch the linked video, you’ll notice he really didn’t get rude with Tarte.  He walks into a small informal gathering featuring Tarte, and the legislator appears to just lose his cool at the very sight of Suter.

Exhibit Two:  Conservative activist Nicole Revels and some children paid Tarte a visit at his legislative office.  According to this video, Revels — as a constituent — wanted to ask Tarte about his bill abolishing the religious exemption for immunizing children.  On camera, you can

see Tarte’s demeanor change dramatically upon seeing Revels in his office.  He gets up from his chair and rushes out to find the sergeant-at-arms.  Revels ask him if the camera is a problem for him, and Tarte responds “No. It’s you.”

It’s an unusual response.  Revels is an attractive young woman who most men would be more eager to talk to or hit on than to call the police on. She doesn’t appear to get rude –at all — with Tarte.  But the legislator, on camera, has security lead Revels and the group of children away from the office.

Here’s an on-camera interview Tarte did with Revels in October 2014.  The discussion was very calm and civil.  Tarte did not seem to mind Revels being in his presence, then.

In politics, you have to expect that someone could put a camera on you at any time.  You have two choices: (1) be polite, answer the questions, and walk on, or (2) take the Bob Etheridge route.  And we have all seen how, um, “well” the Etheridge route works.

10 thoughts on “#ncga: Is Jeff Tarte about to go all Bob Etheridge on us?”