We got, um, “invited” to an interesting meeting yesterday: 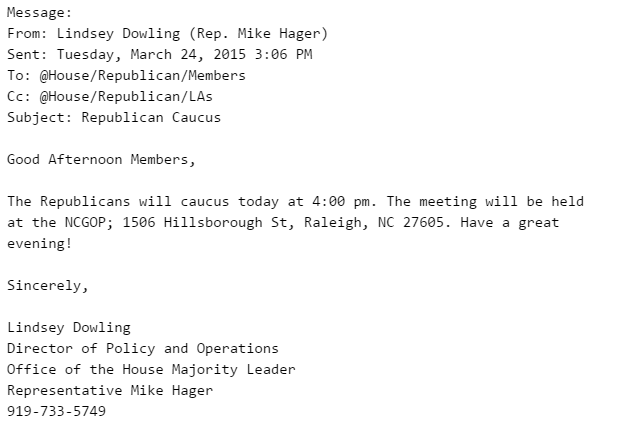 I guess that puts us in the same category as Paul Tine.  Apparently, you don’t actually need to be an elected Republican to be part of the GOP caucus.  Anyway, we thought a personal appearance at the meeting might throw a little too much of a scare into the honorables.  So, we relied pretty heavily on our dependable cadre of spies to inform us on the happenings.

Mcclatchy had an item this morning suggesting that the meeting was all about UNC Board of Governors nominees and issues we raised earlier about Nelson Dollar and his reported extracurricular activities in regard to that election.    According to the speaker, and Mr. Dollar, everything was ”all smiles” and ”all good.”  Well, according to our eyes and ears in the room, stuff beyond the UNC board got discussed and not everyone left there “all smiles.”

During the past election — where four incumbent Republican House members lost their seats — the caucus ran their advertising through a Florida-based group.  My sources tell me the caucus had a binding agreement with the group to handle all of the reelection advertising.  So, you can imagine that everyone was thrown for a loop when the caucus was sent an invoice from this Florida group for $80,000-plus.  Apparently, Rep. Nelson Dollar and one other Wake-based candidate decided to run their advertising themselves instead of relying on the Florida group (like all other House Republicans did). My sources tell me Dollar and the Wake candidate defended their actions by saying they saved the caucus money by running the advertising themselves. (Never mind the fact that there was a binding contract in place.)

The caucus, according to my sources, cut a check to pay the Florida vendor.  THAT apparently quieted that episode down.  Another sticking point that came up for discussion Tuesday night is that someone “found” more than $250,000 worth of unpaid vendor invoices stuffed in a drawer in House GOP caucus offices. (Show of hands. How many of us could get away with blowing off $250,000 worth of bills for a few months?)

My sources tell me speaker Moore had to dig deep into his own treasury to commit six figures toward paying off those invoices.  The caucus also had to throw together some impromptu fundraisers to help raise the rest of the money to get those delinquent invoices paid.

Who was in charge of the caucus during all of these fiscal misadventures?  Ruth Samuelson, a former Mecklenburg legislator, who is now retired and enjoying life in the private sector,  and the aforementioned Mr. Dollar.  Among his many duties in the House, Dollar chairs the House Appropriations Committee.

Sources in the room tell me that leadership quickly put the kibosh on calls to audit the House caucus’s books. Here’s how one of the meeting’s participants put it to us following its adjournment:

“I didn’t see much that looked like criminality.  What I did see looked like a whole lot of stumbling, bumbling, incompetence and stupidity.”

And it looks like some of that stumbling and bumbling got itself promoted up the caucus’s chain-of-command.