Bob Steinburg and his crew LOVE to tell you what’s wrong with everybody else. (They’ll even make it up if they have to.) Bob himself doesn’t miss a chance to thump a Bible and utter some variation of “Praise God” in a public forum.  But a lot of problematic facts are piling up to help illustrate how PHONY so much of that truly is.

In May, a young woman who works as Steinburg’s legislative assistant in Raleigh AND as his top campaign aide was indicted by a Dare County grand jury on one count of FELONY EMBEZZLEMENT.

Steinburg dismissed it all publicly  as “a contract dispute.”  Hardly.  Indictment by a grand jury on a felony means a jury of one’s peers believe the standard of evidence is sufficient to take a case to trial.  A felony conviction typically means jail time.  That’s significantly different from a “contract dispute.”  (Those don’t go before a grand jury.)

The howler monkeys who compose Steinburg’s sycophantic Greek chorus tried to paint the indictment as a conspiracy by the local district attorney, Steinburg’s primary opponent, and various rather specific political rivals.     *(There was another lawyer hiding on the grassy knoll.)*

Granted, everyone is innocent until proven guilty. But it DOES harm your credibility when you attack the character of your political rivals while you employ a top advisor currently under felony indictment.

Here we are in late July, and this Facebook item indicates Ms. London, the indicted aide in question, is still in a position of influence with Steinburg’s senate campaign: 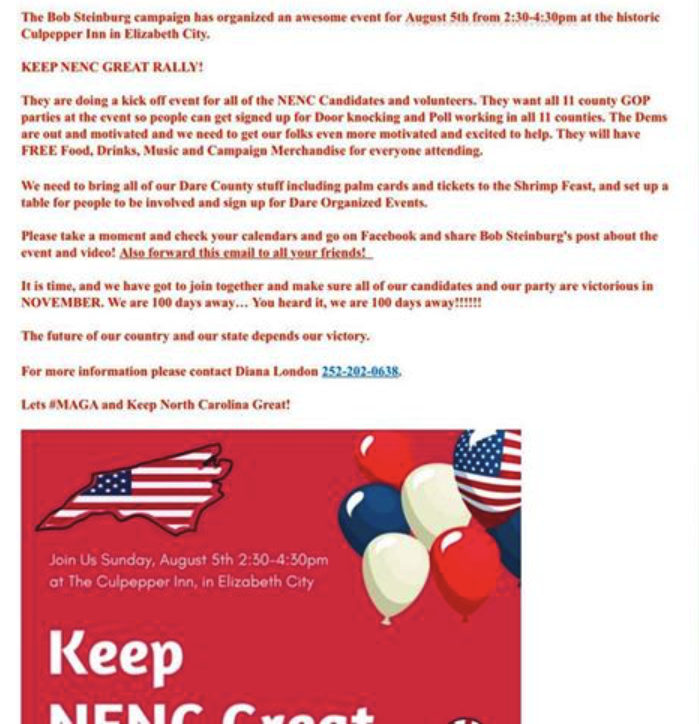 August 5th.  At the “historic” Culpepper Inn.  That place is owned by Elizabeth City Daily Advance columnist and top Steinburg campaign advisor Holly Audette.  (It’s interesting The Daily Advance does not identify her affiliation with Steinburg when they print her columns attacking Steinburg’s opponents and promoting the man himself.)

Audette was in the pages of The Daily Advance just the other day dismissing the controversy over The Steinburg Invitational basketball tournament as little more than her guy Bob just taking on a second job.  (Third if you count the whole diamond wholesaler thing he’s claimed in the past.)

Here are a few problems with Ms. Audette’s spin:

Now, I know this will likely result in Ms. Audette taking to Facebook and launching character attacks against me and this website.  I’m sure the usual suspects with the fake user names and email addresses will show up on this site with their trademark profane retorts and attacks.

It would be great to get some sensible, logical answers to some of these questions.  But, sadly, Team Steinburg has shown little propensity for that kind of thing.