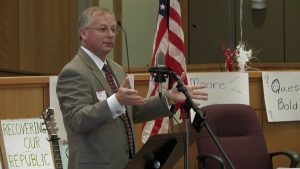 Moore County’s Jamie Boles has had it relatively easy in his decade in Raleigh.  The Republican, representing state House district 52, easily knocked off a troubled incumbent in a crowded 2008 primary.  Between 2008 and 2016, the legislator and well-liked, well-respected funeral home owner got a free pass on election day. (In Moore County, everything gets decided in the GOP primaries.)

In 2016,  he got a scare from political newcomer J.D. Zumwalt in the March primary. Boles was battered with criticism for a less-than-stellar voting record and conservative rating (ranked 62nd out of 120 with a conservative rating of 69.2 out of 100 for 2017 by Civitas) and an alleged lack of responsiveness to folks back home.  Zumwalt criticized Boles for being so enamored with the limelight in Raleigh that he forgot about the word “represent” in his job title.

Well, it’s 2018 and Boles has another primary opponent in the form of 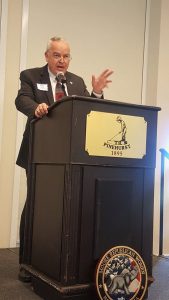 Aberdeen town councilman Ken Byrd.  Byrd, a 30-year veteran of the US Air Force, a Citadel alum and a homeland security consultant, is picking up on a lot of the themes the Zumwalt campaign wielded in 2016.

“We don’t have a voice in Raleigh,”  says Byrd, in explaining why he filed for the House. “Folks here in Moore County are frustrated.  Their calls aren’t being returned.  Money meant for our schools is being shipped off to other counties.  There is a real sense that no one is standing up for us in Raleigh.”

Byrd settled in Moore County with his family mainly because of the desire of his wife — who grew up in the Aberdeen area — to come back home.

Byrd says he’s guided by a sense of duty to serve others.  That guided his 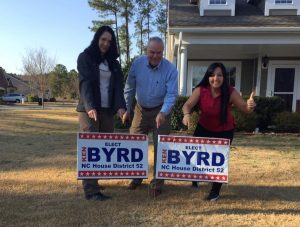 decision to join the board of directors at The Academy of Moore, a successful charter school in Aberdeen.  It also guided his quest to volunteer in Aberdeen town government and eventually run for the town council.

“I’ll never forget approaching then-mayor Betsy Mofield, telling her of my desire to get involved, and asking her ‘How can I help?,’ ” said Byrd. “She looked me in the eye and joked ‘Be Careful what you ask for.’ ”

As an example of his governing philosophy, Byrd cites his approach on the town council when  developers come seeking permits for a project.

“I want to be a problem solver, and want all of the parties to feel they got a 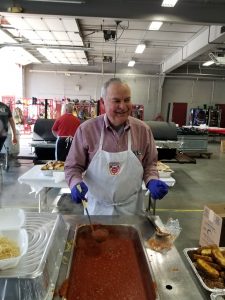 fair shake,” said Byrd. “I try to work with both sides — the developer and the homeowners —  to see if there are areas where each side can give or take a little, so we can come out with a solution that leaves everybody somewhat reasonably satisfied.”

If elected, Byrd said his main areas of focus will include: an aggressive effort to ensure fairness for Moore County schools in the funding process, as well as  reforms in economic development policy — such as the tier system, which many say unfairly hamstrings Moore County,